In an earlier post about upcycling some gifted frames, I mentioned my friend-of-a-friend who had significantly downsized her home. Well when I was going through what she had to give away (which also included.. like … 40 bags of fabric which I re-homed) I found a gilded paper “treasure chest”.

Like the frames, the golden colour doesn’t suit my aesthetic, so like the frames, I chose to give it a good coat of black paint (several actually), and then took some rub-on wax silver pigment to bring up all of the texture (which I’m pretty sure is paper mache underneath.

A similar technique can be seen in the video below, though I use a wax-pigment that is a two-in-one, rather than having to combine the two myself.

I did leave the bottom flat black (since there’s no texture there to highlight) and added little silicone “bumpers” for feet since I’ve found sometimes that putting painted surfaces on top of other painted surfaces can be a bit sticky (not actually sticky.. just… sort of.. ?)

So, not much to this project to talk about, but another pretty project for my increasingly gothic-inspired bedroom. 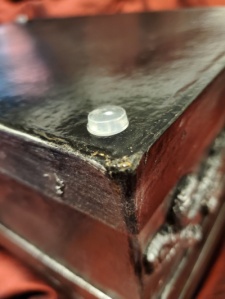 This will likely be going up on a shelf to hold some treasures that don’t really fit my aesthetic, but still want to keep in my room.

I left the interior of the box the original glided tone, since it won’t be seen anyways.

2 comments on “Upcycling a ‘treasure chest’”