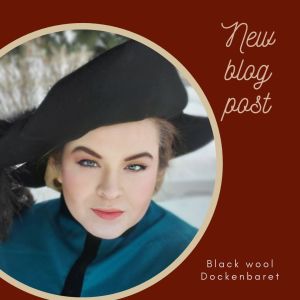 As I was doing my analysis of my German wardrobe in my German Capsule Collection post, I recognized that one of the things I wanted to add to the wardrobe was a hat in a more historically-informed colour.

I have two hats for this period already – a blue-on-blue Tellerbarret, and a teal tweed Dockenbaret with ostrich feathers. (Which I referred to as a split-brim hat.) However in portraits the most common colours are red and black, with the occasional white hat appearing as well.  I wish I could find ample heaps of affordable red wool, but alas, no such luck…. so black wool it would be! 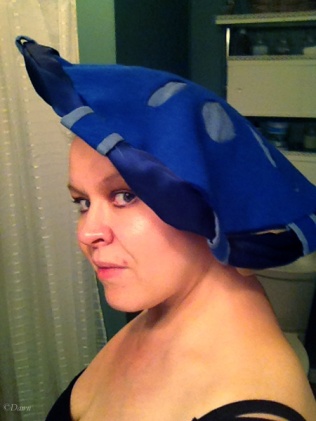 Dockenbaret is most often called a “starfish hat” apparently, and not “split brim” and is often seen in portraits and woodcuts of a wide range of people. Individuals appear both male and female, of varying class representations from the Landsknecht to Saxon princesses. This hat seems common in the first half of the 16th century in German-speaking regions of Europe. (I found this pattern on Etsy AFTER making this hat, and it’s a different style, but seems to look good too!) 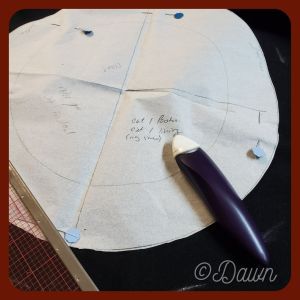 I started off during the summer & fall of 2020 on my long-running Covid project – organizing my fabric stash. I divided up a bunch of my fabric into bins specifically designated for different costume projects, and in the bin for my German wardrobe, were several smallish pieces of black wool totally suitable for headwear. Most of these pieces are under 2 meters, and so while they’d work fine for an accessory, or trim on another garment, they’re not really enough for a gown, coat, or other large garment. I selected a fabric with a good density for slashing as well, though for this hat I wouldn’t be slashing.

Honestly, I LOVED my teal tweed hat so much that I decided to simply re-use the pattern I’d made for it. I think it looks great on me, and has LOOK from portraits that I really wanted.

Thus…. I really didn’t do much different from that hat which I’ve documented already… so if you want to see that – go take a look. I constructed the brim, inserted the wired buckram, attached the crown, inserted the lining by hand, and shaped the hat with heat and steam. I tried the hat on to figure out where to overlap the ‘splits’ between the front and back brim, and tacked them together by hand using buttonhole twist thread.

g the “bite” out of the Dockenbaret brim 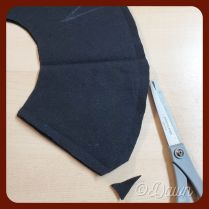 Most portraits show this hat worn over a Goldhaube, a golden cap, but a few appear to be worn right on the head. I really could have used anything for the lining, but with the thought of wearing it without the Goldhaube led me to opt for a black silk lining instead of linen.

However, when I made that hat I thought perhaps the brim could use more structure so this time around I did end up wiring parts of the brim, to allow a little more manipulation. I didn’t use a heavy wire though – this was bought from a package at Vancouver’s Dressew.

In snagging the URL for this post, I saw that Dressew has now adopted an online shopping experience which………. is very… very.. very bad news for me. I love this store, and it’s only that it was not online that was keeping me from spending wayyyyy too much money there. This is likely a C19 development, though it looks like they definitely don’t have everything on the website that they sell in-store.

So then… the embellishment.

A few of the portraits indicate large brooches, embroidery, or other decoration on the brim, but most of the hats in portraiture have just feathers… lots of feathers…. as the ‘bling’ (though some also have no visible ornament at all).

Again, I really LIKE what I did with my teal hat, so opted to do similar with this hat. While lots of local SCAdians opt for bright coloured feathers, I wanted to go with more natural colours as seen in portraiture. However….. I used up all of my light-coloured feathers on the teal hat, so decided to use an assortment of black (and one dark brown) ostrich feather in my collection instead.

I glued the feathers into long, ornate cone finials (this time using Amazing Goop instead of hot glue) and also added a few black duck feathers as well to add more volume and texture. While I sewed the finials onto the teal hat, I opted to glue the cone finials in this case to brooch clasps instead, so that I could move these feathers from one hat to anther if needed… since I don’t have a lot of ostrich feathers left, and suspect I might be making more German Hats again….

steaming feathers over my tea kettle to re-shape them

However… since these feathers have been stored in a box for a long time, they were a bit flat and even had a bit of a bend in the longest one… so that meant I needed to steam them before putting them on the hat.  This was kind of smelly, but oh my.. it made a huge difference to get the feathers to “hang” more naturally.

Finally… I pinned the feathers in place on the hat… and… Done!

With C19 meaning there are no in-person events (only digital ones that I’m usually just in my PJs for lol) I haven’t had a chance to wear this anywhere – just in my front yard during the polar vortex … with my existing Goldhaube and teal wool and black velveteen Gollar.

The Challenge: January: Joy: Create an item that brings you joy, or that epitomizes the joy you find in historical costuming.

Nearly every historical costume I’ve made (and lots of non-historical ones too) have started with the hats. There’s just something I love about amazing headwear, and they often inspire me to create the REST of the outfit, so I can have chances to wear the hats!  Oddly, I almost never wear hats for mundane wear… other than the ubiquitous Canadian winter touque.

This is a Dockenbaret – or as I previously called it when I made one that was similar – a split-brim hat. I’m wearing it with a gold silk (with pearl trim) Goldhaube, and a teal wool and black velveteen Gollar for these photos. (Pretty sure the Gollar was a previous HSM challenge entry.) 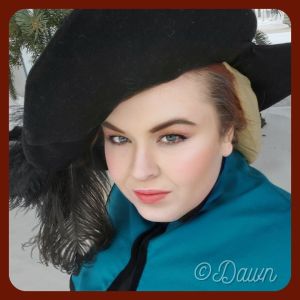 Pattern: self-drafted based on portraits

How historically accurate is it?: Materials are period-correct (minus some of the notions), however the pattern is completely speculative.

Hours to complete: About 5 I think. I never seem to time this. However the pattern was already made.

Total cost: 0$ out of pocket costs – everything was from my stash, with much of it having been gifted to me or bought second-hand. The wool would have run me about $40/meter I think (If I could even find it in stores… which I rarely can. These days it’s nothing but wool/nylon melton cloth) and I used less than a meter. The silk would run me likely in the range of $30/m, and I used less than half a meter of it. I did buy the ostrich feathers ages ago for $2.99 each. The other feathers were gifted, but were in a package that would likely run about $10 – but I only used 4. The bead caps /finials were from my stash too – but I think I bought them for around $1.50 each.

Want to see more of what I make as I post about it?