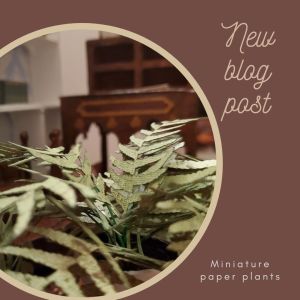 miniature plants for a 2020 holiday gift

I realized when I was about to post about the miniature paper plants I’d made for @CanadianFashionDoll ‘s 2020 Christmas gift, that I’d never blogged about her 2019 gift!

With money in 2020 being so tight, and already having a bunch of these cut out from my time back when the Maker Studio was up and running (it shut down at the beginning of covid and has never re-opened) I decided to make MORE of these paper plants for her in 2020, as I did in 2019.

In 2019, I made her a fern and a spider plant in little faux bronze pots.

In 2020 I made two ferns, a monstera plant, another spider plant, and two miniature ivy topiary plants in little white pots with bronze trim.

The way I did the pots and the “potting” of the plants differed between the two years, so I’ll talk a little bit about that here.

For the pots, I cut the shapes out of cardstock, based on a pot pattern I found online. Ultimately I found them a bit too big, but I felt pressed for time so went ahead anyways.  I assembled them using tacky glue, and once dried, dropped some white glue into them, and then a small nut (from a nut and bolt set) to add weight to the bottom of the pot. Then I put in more glue and cut some Styrofoam from a foam wreath form into the pot to fill it up.

Into the foam went my wire stems, and once they were mostly where I wanted them, I put a layer of glue on top of the foam.  Once the glue dried, I painted it with a brown paint to resemble earth.

For the pots, I used the pattern from the Thicketworks miniature garden accessories free downloadable file. However, since her miniatures  are slightly the wrong scale, I needed to play with the scale a little.  I am using a different laptop, so didn’t have my normal photoshop/illustrator software, so this was done in paint and using printer settings so it wasn’t 100% the right size for me, but close enough after three attempts… LOL

I glued my printer paper to cereal box cardboard, and while it was still sort of “damp” from the glue – and before the glue had time to set up – I used the dull side of a pair of scissors to ‘curl’ the paper into a ‘close enough’ of the right shape.  I used superglue and Heather’s ‘pauper’s bondo’ to attach the bottom to the sides – though had to use a paper ‘bandage’ to secure the side seam of the paper. It just would not hold together using glue only. The little rim was held on with paperclips as it dried – I used tacky glue for that so I could get it lined up properly before trimming off the extra. 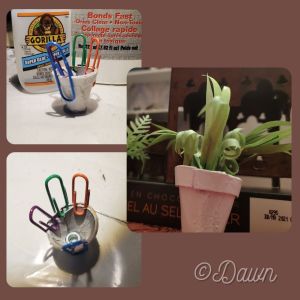 making the miniature pots for the potted plants

Because I didn’t use superglue over the entire thing – I didn’t use Heather’s filing method to smooth out the ‘pauper’s bondo’ because I didn’t think my little pot would be strong enough. However later on I tried the technique elsewhere and really understood how strong this makes paper! I did use a little sandpaper over the glue though – but actually like the little bit of odd texture the material has.

Like the previous version, I used a small screw as a weight, settled into some white glue to add weight to the bottom of the pot, and then used some paper clay to be the ‘potting’ medium instead of foam. On top of that went white glue, which was then dipped into dried, used coffee grounds. It’s astonishing how one little Keurig pod can have so much coffee in it! I had expected there to be more of a coffee smell – but there really wasn’t.

Since the paper clay would take time to dry – I was able at this point to “plant” the wire stems of my plants into the “soil” I’d created.

So… getting back to the spider plants…

The spider plants were actually a happy accident. I had leftover scraps of paper from the ferns, which were simply cut into long strips with pointed ends.

The paper I think is really what makes the project though – it’s  a slightly iridescent green vellum, so it has a really airy quality, and just a little gleam to it like the waxy surface of a leaf. I drew in a line of white pencil crayon on the middle of the leaf, and then added dimension with two lines of darker green on the outside edges of the leaf. I then rubbed the pencil crayon (with my finger. Messy!) to blur the pencil lines, and take off a bit of the colour to make it more transparent.

These were then glued onto short pieces of green craft wire, which became the “stems” so I could “plant” them into my pots. 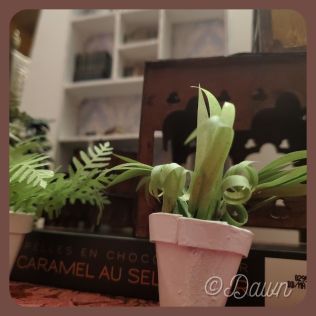 Like I said at the beginning of the post, spider plants weren’t the only ones I made – in a future post I’ll showcase some of the other plants I made for my friend… both for Christmas 2019 and 2020!