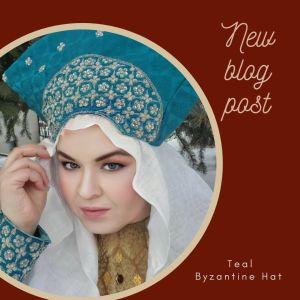 New blog post! I made a heavily embellished teal and silver hat for my Byzantine costume wardrobe

Back in 2016 I made a Byzantine costume for an event/competition (where I won first place in the advanced category!) and part of that was a gorgeous, fun, huge fan-shaped hat called the Propoloma. My pattern was speculative, and I could see two different ways to accomplish the hat – but liked the idea of a very packable hat, especially considering how often SCA events are well out of town and require costumes that will pack up into a suitcase or duffle bag easily.

…. but then I was gifted this amazing teal top embellished with silver beads, sequins, and French wire… and the ONLY thing I could see in my mind’s eye for this was elements for another Byzantine accessory. 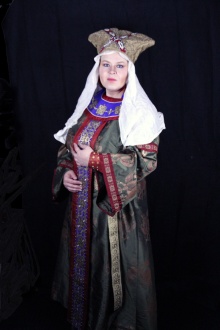 Now…. when I did my Byzantine Capsule Collection wardrobe inventory I didn’t plan on making any more accessories, nor did teal play any part at all.  However… this fabric…. it called to me!

(And.. if I do ever make a red or purple Byzantine gown to expand this wardrobe… teal is going to fabulous with both…)

Now, no… this embellishment is not the period-correct option. Not even kinda. To the left is an image which influenced how I embellished my first Propoloma, and obviously this considerably more blingy.

However, when doing my initial research for this era ages ago, SO many of the images are SUPER BLINGY throughout every element of the outfit – but pretty much always on the accessories.  Most of the designs of the bling tend to be swirls or geometric shapes (largely lozenge) but constant repeating patterns are very common in these images, so although this design isn’t something I can point out in a mosaic, I feel like the overall look and feel works.

Most of the ‘metals’ shown in images of Byzantine artwork are gold, and from what I understand silver isn’t a particularly common metal – perhaps due to popularity and perhaps because it just doesn’t survive as well as gold. I did hear that Electrum was used in this time period (from a class I took) and because of it’s high silver content would have appeared like silver… so again – not something that’s very visible but it’s vaguely plausible….

I found multiple depictions of different shades of blue, and one light teal, so I think this fabric colour is ok for this period. (Though depictions in paint are going to be different from what’s possible in fabric.) Maiwa states that fustic and Indigo give a teal dye, as does pre-dying fabric with Myrobalan before indigo, and weld and indigo can also give teal.

… and darnit, I just love this fabric!

Cutting up the top

The teal top before cutting it up

I ended up laying out the pattern to use the neckline which definitely made construction a lot more challenging – but I LOVE the effect it offers. 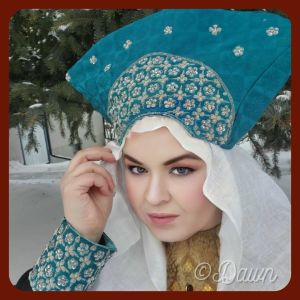 Teal hat (and matching cuffs) for my Byzantine costume wardrobe 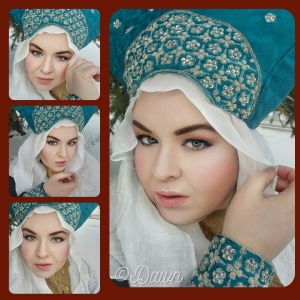 Teal hat (and matching cuffs) for my Byzantine costume wardrobe

Due to all of the embellishment, a lot of the outside fashion fabric of the hat had to be constructed by hand. I’d sew all the seams where there were no beads/etc as much as I could by machine, then leave long thread tails and continue the seam by hand, then picking out any beads/sequins from the seam allowance as needed to finish the seam.

Later I’d go back and stitch back in any beads I’d had to remove and reinforce the beading on the edges with extra stitching. I also dropped a few drops of Fray Check onto these areas to make sure I wouldn’t lose beads while wearing the hat.

For the lining I chose a seafoam linen that I got on sale (since seafoam wasn’t a big seller that season I guess) and for the interlining I used some firm cotton canvas I was given by the same person who gave me the outer fashion fabric.

I cut both layers of fabric with the normal pattern, but the interlining had no hem at the face edge, while the lining was given an extra long hem. Next I layered each pattern piece with it’s matching set (lining and interlining), zig-zag stitching around the outside within the seam allowance.  For the curved front part, I traced the fashion fabric layer onto the canvas with a pencil, stay stitched just within the line, and then cut out the curve.

Cutting the interlining out of cotton canvas

Tracing the curve onto the cotton canvas interlining

The assembled pieces of the lining and interlining were sewn together, and then basted around the front curve. since I wouldn’t really be able to press the seam allowances into place in such tight corners, I opted instead to use long hand stitches to tack the seam allowance down instead.

Then I folded up the hem around the circumference of the hat, apart from that curved front, and basted it up with a zig zag stitch. The curve was clipped, pulled back, and then pinned and basted in place too. I also ran a very fine line of straight stitching which would stay in the hat along this curve, largely to ensure as I instill the lining, this didn’t give me any fuss at all. A drop of fray check into each clip also helped me feel confident with this. 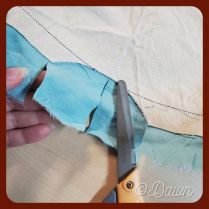 clipping into the curve for the front of the hat

With all of the embellishment and the complex curves I wasn’t going to bag the lining, so it was inserted wrong-side-out into the fashion fabric hat, pinned into place, and then I basted the two together by hand.  With the beaded areas, using pins to hold it all together just wasn’t going to work, and needing to hold the hat in odd places to hand-stitch in the lining, I was moderately concerned on poking myself!

Then hand-stitched into the hat, turning the hem of the fashion fabric as I went. I used sort of a stab stitch, with the stitching being quite invisible (thanks to very nicely matching thread that just happened to be in my stash) on the outside of the hat, and hopefully being neat and tidy, although definitely visible on the inside.

Because the hat’s shape disallows a hatband… my vague thought is that having the stitching that holds the lining in be visible….means that if worse comes to worse and I need to give it a good scrub… I would be able to remove it easier. Realistically – I will wear it with a veil…. and its unlikely I’d ever do the work of pulling out the lining.

using fray check to secure individual elements before trimming them away 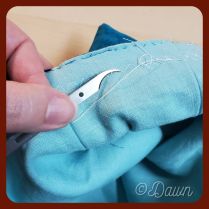 removing the basting that was holding the hem of the lining back.

I also used fray check on some of the little elements that were leftover on the remains of the shirt, and trimmed off the extra fabric. Two of these I sewed onto the front of the hat. I considered adding additional leftover bits of the hem onto the sides of the hat – but the shapes weren’t ideal so opted not to.

In photos I’m wearing the hat with the lightweight half-circle white linen veil I have worn with many, many, many other costumes, the teal cuffs I made with the hem of the shirt (coming in another post) and the golden collar I originally made.

I really love how in my other costumes, the hat, collar, and hanging panel all coordinate (with the cuffs only really coordinating with one of the two looks) so I know that I will want to make a collar and hanging panel to coordinate with this. I’m not entirely sure how that will happen… like the blue one I likely will need to find some trim that has silver metallic threads, and use it as trim on the panel, and cut out the elements for the collar.

Because both of the other gowns have gold as the metal – this also means I’ll need to make a new gown to go with this hat & cuffs (and the eventual collar and panel). When doing the Byzantine capsule wardrobe analysis, I determined that I’d like to make either (or both) a red silk gown or a purple silk gown.  As long as I kept trim off it – both red and purple would work with both the gold existing accessories as well as the new teal and silver accessories.

If I were to go with purple silk… I could totally see using a purple and silver trim, coordinated with teal fabric. It’s just a matter of finding the fabrics and trims! I do have some of the embellishment from the shirt leftover, so I might be able to use that in some way as well.

This hat is my entry into the April 2021 Historical Sew Monthly!

The Challenge: April – The Costumer’s New Look: Give an old costume a new look, either by creating a new accessory or piece which expands or changes the aesthetic and use of an outfit, re-fashioning something into a costume item, or re-making an old costume.

What started as a top, has been refashioned into a new hat for my Byzantine costume wardrobe. (And cuffs too!) The top wouldn’t have fit me, but the embellishment was just too nice to let it linger in a drawer.

Material: The teal fabric looks and feels like silk, but a burn test says it’s synthetic. It’s lined with a very lightweight cotton gauze, which I just used as if they were one fabric. I also used a cotton canvas interlining, and a 100% linen lining.

Pattern: Self drafted based on speculative design from two different period images.

Notions: thread  – then re-adding beads, sequins, and French wire that were trimmed off the embellished fabric back on again.

How historically accurate is it? The shape is as correct as I can suspect based on two different period images. The embellishment follows a general period theme – though isn’t documentable itself. The colour is period appropriate both in dyestuff and what’s shown in period images. The teal material content is NOT period, though the lining and interlining likely are.

Hours to complete: Probably about 6, with most of that because of the hand sewing and fussy cutting.

Total cost: The main fabric and interlining were both gifted. If I were to buy a top that is similar, I really don’t know what it would cost – looking at an Indian clothing store online, it looks like they’re normally sold as sets, and ones with this level of embroidery (unsewn) are in the $170-230 range. The cotton canvas would cost around $15/m. I bought the linen at about $17/m on sale. There’s about half a meter or less of each used.

New blog post! I made a heavily embellished teal and silver hat for my Byzantine costume wardrobe

Stay tuned for the cuffs that match this!