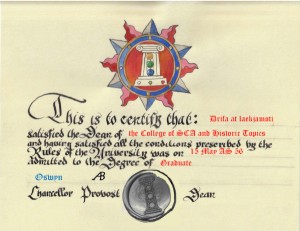 Drifa, Graduate of the Royal University of the MidRealm with an emphasis in SCA and Historic Topics

One of my favourite things about the SCA is the classes – the opportunity to learn new things (and share things as well). I think it’s a great way for newcommers to both learn about the SCA, as well as gives folks who feel awkward or unsure, or whatever in their first few months… something to DO – its a good way to sort of organize time. 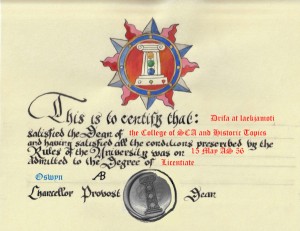 Drifa, Licentiate of the Royal University of the MidRealm with an emphasis in SCA and Historic Topics

Licentiate – 15 credit hours across any of the colleges. If 7 hours are from a particular college, the Licentiate may include that emphasis.  (confirmed May 2021)

Graduate – 30 credit hours across any of the colleges, with 15 hours in a single college of emphasis. (confirmed May 2021, thus making me “Drifa, Graduate of the Royal University of the MidRealm with an emphasis in SCA and Historic Topics”)

Adept – 55 credit hours across any of the colleges with 30 hours in a single college of emphasis.

Unfortunately, the work of putting on weekly workshops most certainly took its toll on the ministers and their deputies, as well as volunteer moderators and teachers I presume, so in March 2021 they stopped doing weekly workshops online, and instead it looks like they’re focusing on single-day events. The next one is June 19, 2021 – Spirit Day. Of course with a one-day event I won’t be able to get the credit hours needed to reach Adept – but hopefully they’ll have other events as well so I can reach that milestone while learning some awesome things from awesome people.

There are 6 different colleges with areas of emphasis – most of the classes I took have been in SCA & Historic Topics, mostly just because that’s what seemed to work best for me online.  Really.. in any other time, most of my interests would fall under Studio Arts as well as Textiles.

I find this approach really interesting. Here our awards are based just on the number of classes someone has taken, so I wonder if someone takes enough classes in one area, and then also enough classes in another area, if they’d be granted multiple degrees?

The Royal University of the MidRealm also offers recognition for their teachers (as does Avacal). I haven’t done any online SCA teaching yet oddly. There were lots of classes I taught or was prepared to teach in person (there were a few times I was going to teach but then wasn’t able to physically get to the site since it was out of town) but nothing I was able to figure out how to translate to teaching online with the kind of ‘home office’ set up I have.

Are you taking any online SCA classes?

Have you been taking any classes online during the pandemic? What are you learning? Have you figured out how to teach online too?  Let me know in the comments below!

Or come share with me on my social channels!