Near the entrance to the Viking display at the Royal Alberta Museum (RAM) there was a really small display – featuring a single silver coin. It was just one of many exhibits that included coins used as personal embellishment.

The coin has a ship motif on one side, and was found at Lolland, Denmark. It’s been dated 825-850 CE. The coin has a hole punched at the top, suggesting it was worn as a pendant. 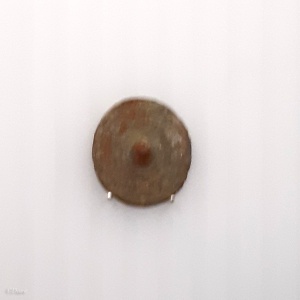 There was also a single shield motif pendant nearby. (Not a coin, but similar in size) The pendant was found at Nørholm, Jutland, Denmark, and was dated 775-950 CE.

There was also a fantastic necklace embellished with coins. The display listed this as “Islamic coins used as hanging ornaments strung from a string of beads”, found at Øster Halne Enge, Jutland, Denmark.

Finally, there was a coin hoard, including many coins that had been pierced to use as pendants (or otherwise string) as well as some with bails added, absolutely meant to string and wear as a pendant.

This hoard is from Kannikegærde, Bornholm, Denmark.  The hoard includes coins, many of which are still intact, silver ingots, jewellery, and hacksilver. The hoard is dated 900-1000 CE.