After looking through a huge bundle of beads specifically seeking out beads similar to Viking Age examples, I had a LOT of beads leftover. I arranged to share a lot of these with fellow crafters, but I also thought I’d go through a few OTHER periods that I costume for, and see if there were any other necklaces (etc) I could make with all of these beads…

I started with looking at Ancient Roman examples. 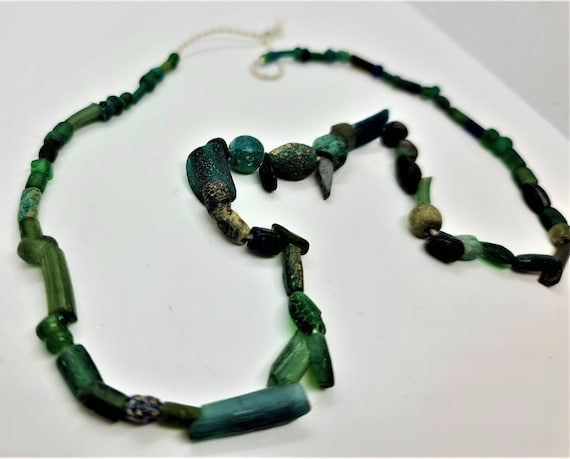 This example features all dark green glass. Oblong (barrel), drum, round. Most beads are transparent, while a few are opaque.

This is listed at 30 cm long, making it even shorter than choker length, so it’s very probable that there was a longer clasp, or that some beads are missing.

Selfie wearing my green glass necklace with my Roman outfit

For this one I just looked through my collection for dark green transparent glass beads. I largely aimed to have the largest beads in the front, and smaller towards the clasp. I loved that this necklace had a lot of very unusually shaped beads, letting me use a lot of beads I’d not be able to use in other places.

I don’t LIKE super tight necklaces, so made mine a little longer, and used a plain lobster clasp, which won’t be seen when I wear it.

This example uses dark and bright blue glass beads alternated with small gold disc beads. Most of the beads look like transparent glass.

These are largely pony, drum, and disc beads with a few other shapes. Larger beads to the front, smaller to the back.

For my own necklace, I opted to mostly use dark blue transparent glass. While these beads are largely pony, drum, and disc shapes, I didn’t have enough of those shapes exclusively, so took advantage of the style of the green necklace, and decided to use a variety of shapes including more unusual shapes. 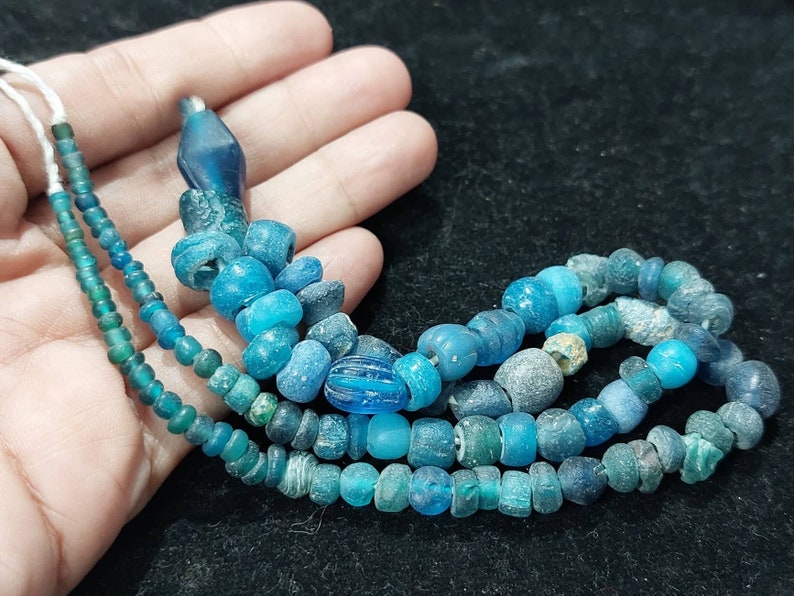 This necklace is made of largely transparent (a few opaque) light aqua blue beads – drums, ponies, discs, a melon bead, a large bicone, etc. The beads are gradated with the largest at front, smaller at back. Smaller beads have more of a green tone.

Like the green glass necklace, I opted to not use spacers between each of the beads. I actually thought I would… and then once I was finishing it off, realized I’d forgotten to!  Like the original I used a mix of shapes and sizes, transparent and opaque beads, gradating with the largest beads at the front and smallest beads at the ends.  I also finished off the necklace with a toggle clasp, which while not historically informed, won’t be seen when I wear it, but is much easier to put on rather than putting it over my head (and hairstyle).

Like the dark blue glass necklace, I also made a fourth necklace in the same style, but using rose quartz beads, and rose quartz coloured glass beads. Here too I used a bunch of different shapes and sizes of beads, and used a silver-tone spacer bead between each pink bead. Like most of the other examples of necklaces from this period I mostly used larger beads at the center and smaller beads at the ends, and finished the necklace with a toggle clasp. Not historically informed, (none of the samples I could find had a clasp at all) but functional and it will go unseen when I wear it.

… and a bonus amethyst purple necklace

Since I really liked the look of some of these necklaces, and had enough beads, I decided to do a fifth necklace in this style, with the dividing beads, but this time in amethyst purple. Once again I used a modern clasp, and centered the largest beads at the front.

I’m doing lots of cool things with the glass beads pulled from my collection and sorted out depending on historical evidence… click the Dating & Placing tag to see some of the research I did about these beads, or….

One comment on “Beaded necklaces – inspired by Ancient Roman examples”