After looking through a huge bundle of beads specifically seeking out beads similar to Viking Age examples, I had a LOT of beads leftover. I arranged to share a lot of these with fellow crafters, but I also thought I’d go through a few OTHER periods that I costume for, and see if there were any other necklaces (etc) I could make with all of these beads…

I started with looking at Ancient Roman examples, and then moved on to Byzantine.

The costume period for Byzantine that I focus on is 11th century, but when I searched for examples, I found very little beaded jewelry that was specifically dated.  Instead, the first example below is simply labeled “Byzantine”. When I did specifically search for 11th century, what I mostly found was rings, however the amethyst and emerald colour scheme still seemed very dominant, so I feel comfortable working with examples using these stones, even if the beaded pieces themselves are dated much earlier than the rest of my intentional costume. 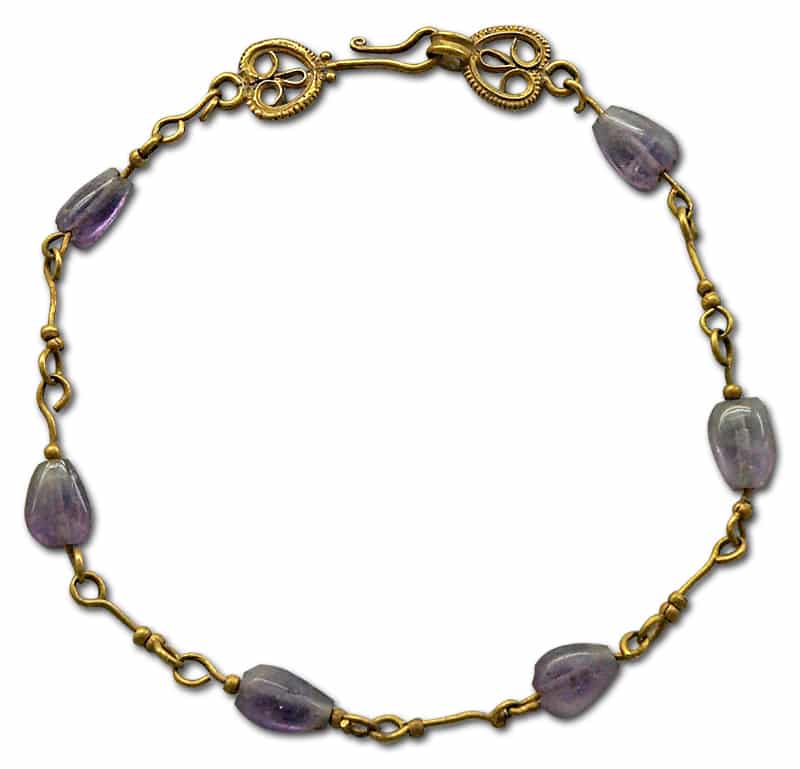 The first (on the left)  has transparent amethyst (coloured glass or stone) oblong and teardrop shape beads with gold wire connectors. Between each amethyst bead is a gold bead, also on a connector – but with a LOT of space – the loops aren’t right up against the bead which I find very interesting.  This is a bracelet, but I like the style a good deal.

The second example (right) has oblong amethyst, green cube, oval and rectangular translucent or opaque  beads, and a few small pearls. Gold connectors, and a cross-shaped pendant. This is dated 6-7th century. Well before the time period I’m interested in, but I still really think it’s relevant for something I want to make.

While the necklace with the cross is MOST appealing to my eye, style wise (and will let me use multiple shapes of beads!) I will be omitting the cross, and going with a pendant-less style instead.

Another style I really like is the necklace on the far right of this image above – blue beads with red and white ‘eyes’ (layered dots) intersected by long orange beads. Described as glass and coral. I actually have these blue beads with layered red and white dots (although the blue is brighter) which I found very exciting… HOWEVER… I have them designated in my Viking Age grouping of beads. I also have coral beads – but those are in my 1480’s Italian Renaissance “collection” (and they’re round, not long tube beads).  Still… I wanted to save this image and design for the time being… just in case…

For this necklace I pulled a bunch of opaque dark jade green beads of various shapes (oval, barrel, teardrop, sphere) that are all the same shade, as well as an assortment of amethyst purple beads.  The purple beads vary between ones that very well might be amethyst, obvious clear glass purple beads, foil-lined purple beads, etc. The shapes are varied as well, from disk-like beads to cubes, ovals, and barrels. I also noted that in the extant original, the pearls aren’t round cultured pearls, but rather irregular, more like freshwater pearls (?) so I opted for the same thing – irregular shaped pearls from my “pearl box”.  (Yes, I have so many pearl beads, that I have an entire shoe box just for them…)

Selfie in one of my Byzantine costumes, wearing my new beaded necklace

Each bead was individually strung on a piece of wire which I shaped into a loop at each side and attached together. For the pearls I used a much higher gauge wire (thinner) since the hole was so small, and I made several loops so that the thin wire wouldn’t as easily slip through the opening in the loop it was attached to.

I loved how each of the examples I found has a beautiful golden Shepard’s crook clasp – but I didn’t have anything that even resembled this so I simply used a loop at one end, and used my wire to shape a Shepard’s crook hook for the clasp itself.

I still have some purple beads that are more pink-toned, and some more jade-green beads that are a little lighter – I might try to make a second version of this, a bit shorter, at some point. Not now though… there are other beaded projects to tackle first!

Selfie in one of my Byzantine costumes, wearing my new beaded necklace

I’m doing lots of cool things with the glass beads pulled from my collection and sorted out depending on historical evidence… click the Dating & Placing tag to see some of the research I did about these beads, or….

One comment on “Beaded necklaces – inspired by Byzantine examples”