Back in January I made a silver/black snakeskin PVC underbust corset for a friend (as a belated Christmas gift) and while I was make it, I thought how cool it would look worn with a coordinating neck corset too.

I made a neck corset for myself ages ago, but honestly never really wore it.  I made another for sale (to to with the pink dragon underbust) but that wasn’t designed to fit me anyways.

Instead of trying to draft a new pattern from scratch, I just used Aranea Black’s Raven Neck Corset pattern, which is available as a free download. END_OF_DOCUMENT_TOKEN_TO_BE_REPLACED

The March 1-15 theme is Pink / Purple so I’m going to be using my purple  overbust silk corset with an angel stencil. 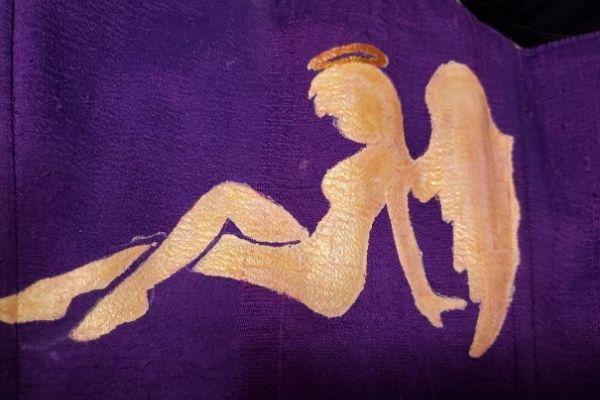 The angel stencil is designed after the “mudflap gal” – but with angel wings and a halo. I don’t recall where I got the idea from, but think that I ended up taking an image from online and putting wings on her.

The fabric is a navy and purple shot dupioni silk. The boning and waist stay are in the interlining, and it’s lined in black. There is not front opening, which means I have to pull it on over my head. I didn’t want to disturb the stencil painting in the design, so this was the best option  -though it does make it harder to put on and take off.  Of course, it has lacing in the back.

I made this many years ago, but haven’t shared it here before… so since I took photos for the challenge – I’m posting it here now too! I realized in talking to an acquaintance about commissions, that I haven’t posted the vast majority of my corsets here!

Of course… since I made it a long time ago, that also means I don’t have any work-in-progress photos – or if I do, they’re not on this computer!

The finished back of the pink and snakeskin PVC underbust corset on my dressform.

Back in 2020 I made a pink PVC hobble skirt for a friend, and with the leftovers I also made a circle skirt for myself as well.  There were still a few scraps left over which I hung on to… just in case. (Although I give most of my leftover fabric to a friend who sews doll clothes, things like PVC I usually keep because moderate sized scraps often come in handy.)

Well, I hadn’t seen my friend in several months, but then they were coming to visit in late January, so I figured I’d try to “whip up” a corset for them, using the hot pink PVC leftovers as exposed (decorative, not functional) bone casings.

I originally planned on using a black PVC for the main body of the corset, but when I was going through my stash, all of my plain black PVC fabrics were really too thin to use for a corset – or too soft to handle the wear that the lacing would cause.

However, I had this black and super-dark silver snakeskin PVC (from a Medusa costume I did years and years ago) – and I had lots of it… enough for a corset for a friend, as well as one for myself if I still wanted to make another. Together with the pink PVC, it looked really neat, so I started drafting…

END_OF_DOCUMENT_TOKEN_TO_BE_REPLACED

The January 1-15 challenge theme is Sparkle & Shine. I picked this navy/teal shot shantung silk corset embellished with random metallic stitching for my entry.

I don’t actually have a lot of corsets that are glittery or sparkly, the first one that comes to mind is still a work-in-progress, and there’s no way I’ll get it done by the Jan 15 deadline anyways… so the metallic stitching in this corset (since I entered my silver metallic corset for a previous challenge) will have to do!

I made this a number of years ago, with leftover silk from another project. It has contrasting purple/navy shot dupioni silk “bone casings”… though the bones are actually in the interlining. It has a strong front zip, and back lacing.

I don’t have any work-in-progress photos to share unfortunately. I made this a while ago, and if I took photos… they’re not on this computer.

Watch my Instagram Reel to see a close up of the metallic stitching. 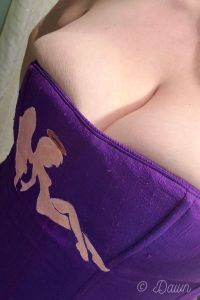 Since for some of the themes I’ll need to take new photos, hopefully I’ll also share some of them here – at least the ones I haven’t shared before. I will only be sharing the ones I’ve made of course though… not the ones I’ve bought.

I also wanted to make a record for myself of which corsets I want to use for which challenge.. just so I can remember for when the deadlines get closer.  The photos can either feature a corset with the theme (so the red/orange theme could be a red or orange corset) OR the photo can meet the theme, with any corset. (So the red/orange theme could be a black corset, over a red dress, or with an orange background.) This way folks who have huge corset wardrobes can participate – but so can people with limited corset wardrobes.