When making the second version of the horned headdress – the horned hennin for the January 2018 Historical Sew Monthly challenge – I learned that in the time period this was depicted in my main inspiration images, fashions were changing very quickly, and being ‘out of fashion’ became a more significant social issue. With that in mind, I decided to dig a bit deeper to see if I wanted to make a new garment to accompany this new hat.

While I started the millinery project just with the thought of exploring the style for a friend who wanted to make one – once it was done I thought it might also be useful for the elevation celebration costume for Philippe, who will be elevated to the order of the Laurel (in the SCA) this spring. END_OF_DOCUMENT_TOKEN_TO_BE_REPLACED

A while ago I made my first horned (or heart-shaped) hennin. Recently, a friend commented about wanting to make one of her own, but as we were discussing styles, I realized that she wanted a different style than what I had in mind.

I was tickled with the idea of trying a different method (and being able to help her do the same) so decided to look a little more at this style, to try to make a new horned hennin of my own.

My friend wanted to make a “Christine de Pizan double horned hat”, which led me to images like this: 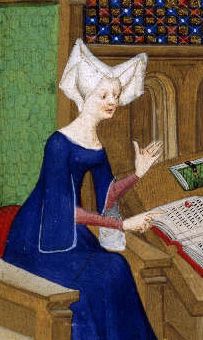 In my previous post, Short-notice German garb, I showed a number of paintings that were helping me decide on what direction I wanted to pursue for a future German outfit. I decided between the Cranach-style (Saxon gown) and the Landsknecht-style… deciding that I wanted to try the Cranach style instead.

END_OF_DOCUMENT_TOKEN_TO_BE_REPLACED

For an event in mid-January, I am hoping to make a German costume to celebrate the elevation of the new Baron & Baroness of Montengarde….

On October 29, 2016 the King and Queen of (SCA) Avacal announced the heirs to the thrones of the Baron and Baroness of Montengarde (mundanely Calgary, Alberta, Canada – where I live). The heirs both have later-period German personas. After the elevation of Caterina the following weekend (November 5) where many of her friends and acquaintances made later-period Italian costumes to accompany Caterina in her procession, the future Baroness asked if we would consider making slight adjustments to our Italian garb to make it more German for the event where they would be invested as Baron & Baroness.

That event…. is in mid-January.

END_OF_DOCUMENT_TOKEN_TO_BE_REPLACED

On May 17 I published my entry for the Historical Sew Monthly May 2016 challenge – a pair of German hats (worn together). I’ve been pretty busy with a few different things so I didn’t get to the longer post about these hats until now.

Goldhaube and Tellerbarret worn with a mundane sweater (iphone photo)

I was inspired to work on these hats because the the (SCA) Royal Progress is Cologne for Silverwolf 2016. With this in mind, I wanted to attempt to make my first German costume. While I’m strongly attracted to the Cranach-style gowns, I thought that they might be too fitted for me to accomplish right now on short notice (since I would need a hand with the fitting). Instead I opted for the Landsknecht style, which nicely worked with the “holes” theme of the May Historical Sew Monthly challenge.

Like my Byzantine costume, which also had a short deadline and my Istanbul costume (likewise, short deadline) I didn’t do in-depth research for this costume; instead starting with Pinterest.