Back of the sundress with the added yoke

When I was at the fabric store (ages ago!) they had a great pattern sale, and as I wanted to put together a few cute, super-simple summer sundresses, I grabbed one – McCalls 6085, a plus-size pattern that includes a simple t-shirt kind of top (or dress) a simple sundress (or top) and a pair of pants (or shorts). I also grabbed some fabric from the discount bin to mock the pattern up with – something inexpensive, but also cute enough that I’d wear it if the pattern worked out well with minimal alterations.

The fabric is a white base with a black abstract flower and a grey-purple abstract flower – it’s  from R.E.D. International Textiles (#C68-30-708 if you’re curious) and is listed in the selvage as an “Original designs exclusive to Fabricland/Fabricville”, and is 100% cotton. I think the pattern was $0.99, and the fabric was probably $1.99-2.99/metre. Overall, a pretty inexpensive dress…

Of course, even a simple dress can be altered like mad… so here’s some of the alterations I made to the original pattern…

New cotton (with linen yoke) sundress for the summer! 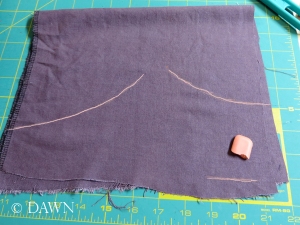 I just drew the shape of the yoke on the fabric with chalk… and hoped for the best!

Once I made up most of the dress and put it on to test the bodice fit, I HATED how low the back was. I don’t mind seeing bra straps on the shoulders… but I don’t like seeing a back bra strap… and with this, the WHOLE THING was visible. I ended up eyeballing a contrast back yoke, and cutting it out with fingers crossed – turned out perfectly! It’s fully-faced with the dress fabric, because I had a lot more leftover dress fabric than the yoke fabric – the facing was a lot easier than binding the curved edges.  I also installed the back ends of the straps with the facing.

The yoke fabric is actually a scrap of hand-dyed linen leftover from one of my Viking Apron Dresses, which just happens to be nearly the PERFECT colour to match the grey-purple in one of the flowers! There was about a 12×12″ square with about a 6″ tail leftover from my previous projects… just barely enough!

So… now that I have the pattern…

I can make up a few more of these super-casual summer sundresses!

I’m thinking medium grey linen with white trim… maybe a bold bright floral… a shorter version with a lace hem…?
How do you think this would look nice? Let me know in the comments below! 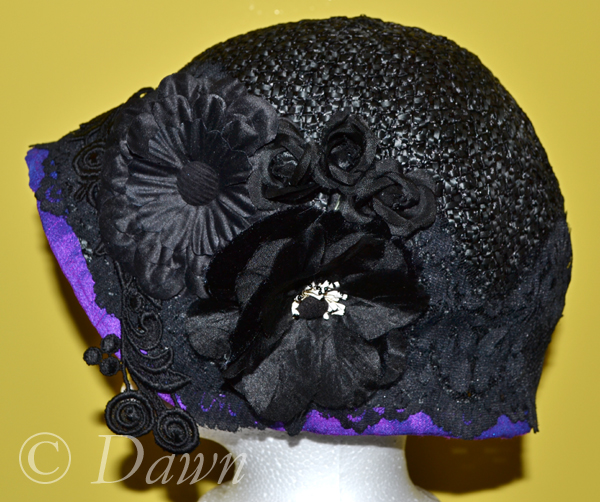 After Millinery class #6, I took the black straw hood home to work on outside of class.  I envisioned the beautiful cloche like in some of my example inspiration photos, but it ultimately didn’t work out.  I just didn’t LIKE the cloche shape with my features.  For a review of the process up until that point, please read my post on the cloche.

So… reworking was in order!

I started basically by folding up the brim and seeing what shapes I could create.  I stood in front of the mirror twisting and folding and I’m sure making a lovely mess of things.  This is one of those tasks best done when home alone I’m certain, because anyone watching would have likely thought I was quite a ninny…

Ultimately, I found a shape I really liked, but by then I had turned the hat inside-out, so I turned it right-side-out, and re-folded the hat back into the shape that I had liked.  At this point I just left it sitting alone (so it could think about what it had done!) and only returned later to trim the raw edge with some gorgeous bias I had made for a previous corset project.  (Its purple shot with blue dupioni silk and it’s luscious!)  As with the blue straw, I could have put the binding on partially by machine and partially by hand, but instead I ended up doing the whole thing by hand.

Then I let the project sit – while I worked on other things.

When I got back to it…

When I got back to the project, even though I’d taken notes about the design, I looked at the hat, and thought “what was I thinking?” Not in a critical way – I just couldn’t see in it what I had seen before!

So, back to the drawing board, I removed the buttons pinning the hat into the shape I had created, and then used a generous amount of steam from my iron to re-shape the hat back into the original cloche shape. I tried this on… and suddenly… it worked! I don’t know if my face shape changed slightly, or if I just became less critical of my tall forehead (I did recently cut in some bangs/fringe, so that’s possible…) but it worked.

So, looking at some of my inspiration photos in the post I originally made about the cloche, I decided on a single-colour scheme with lots of black-on-black texture, and started previewing a number of laces, ribbons, flowers, appliqués, and other embellishments from my collection. 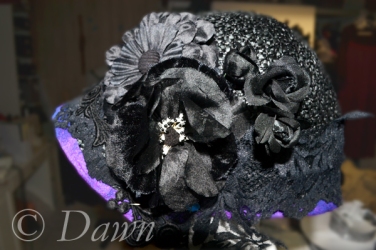 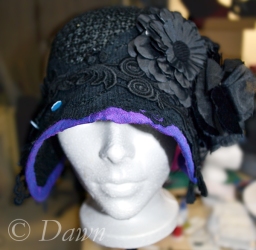 Using super-fine pins, I started layering up all of the elements that worked, in the approximate areas where I thought I’d want them to permanently reside.

Once I liked what I had, I grabbed my beading needle (since it’s long and super-thin) and started hand-stitching each element down, working backwards.

So, here are photos of the finished hat – what do you think? Let me know in the comments below! Maybe I’ll have the chance to wear it sometime soon and take some action shots!

In the advanced millinery workshop post I mentioned a black and a silver topper – this is the spotlight post for the silver/grey topper. I’ll do a separate post for the black one as well.

These aren’t “real” top hats for a few reasons – the band is straight, rather than the slight hourglass shape typical to top hats, and the brim is turned instead of being blocked on their own and reattached.  I liked how the silver topper was turning out so well when I was working on them that I decided to work with a black one as well (even though I already have a black top hat…)

END_OF_DOCUMENT_TOKEN_TO_BE_REPLACED

I named another facinator that I started in the Advanced Millinery class the ‘Small white facinator’ in an earlier post.
From my previous post:

This facinator came out some of my own purchased stock… I should have cut the larger hat first, and then used the remains to cut this, but the one block that fit me was being used to block up a felt at the time (or rather, waiting for the felt to dry..) and I was impatient…. This used the same block as the scrap sinamay facinator, and I still need to trim the excess, wire, bind, and decorate this one. I have NO ideas right now – I’m thinking perhaps a hair-flower I picked up from Ardene’s a few weeks ago and perhaps some of the little feathers I picked up from the instructor or from my small collection of feathers.

After getting this one home, I trimmed off the excess sinamay, and wired the edge as planned. I had picked up some pretty dangling flowers from the instructor which I thought would look nice – a bundle in burgundy/red/pink (with some gold/copper glitter) and some in plain white. I ended up taking my lead for the binding from the flowers, and picked a piece of scrap binding in burgundy from my stash, and trimmed the sinamay with that. From there I re-strung the dangling flowers, intermixing the white with the red in two bundles. I added in the elastic loop trim on the inside of the hat to hold the comb (to be able to wear the facinator without it blowing away!) and then added the first and second bundles to the crown of the hat – occasionally tacking down a few strands so they would fall somewhat reliably. 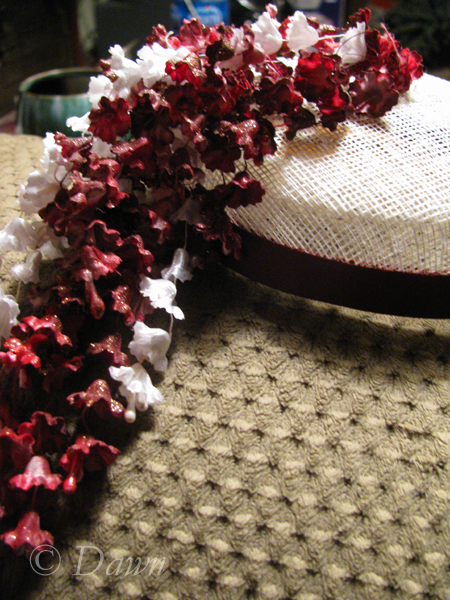 I think that the overall result is fairly simple compared to the huge feather-and-flower examples that we were shown in class, but still really pretty. 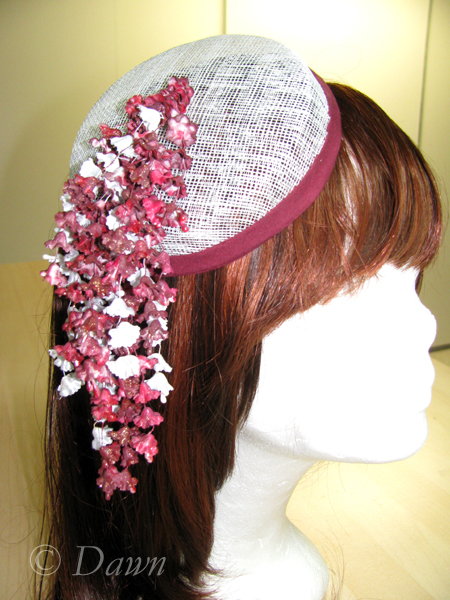 Some photos of the finished product.. what do you think? Where would you imagine wearing something like this? Let me know in the comments below!

Image from Chapters/Indigo. Sorry if the image breaks in future - click for original or to purchase.

So, I’m still on the hunt for a good book that can teach me more about ribbon cockades and ribbonwork, in particular for millinery.  However, while there are a lot of books with instructions about ribbon flowers, there doesn’t seem to be much on what I’m really looking for at this point.  Boo!

The Secrets of Fashioning Ribbon Flowers by Helen Gibb is exactly that – a book on making fake flowers from ribbon.  The book has clear illustrations and inspiring examples (mostly of examples using a LOT of individual flowers = time-consuming!) but the focus is entirely on flowers.  The book starts off with some background, history, and supplies, then goes into individual flowers (sweet peas, cherry blossoms, gardenias, fuchsias, roses, etc.) and then into projects – bouquets, framed bouquets, lampshades, wreaths, topiary trees, broaches, pillows and more.

It’s a well-written and well-organized book.  While a few of the designs relies on having access to a certain kind of ribbon or fabric (ie: off-white bias cut pink/peach ombre-dipped frayed silk for the carnations), many of the designs are shown in a variety of materials – for instance the folded roses are shown in a simple fabric ribbon, a metallic striped ribbon, and a metallic sheer ribbon – which I really appreciate because it shows how the same style can look very different when made up in something less than the expected fabric.

However, despite how good the book might be – it’s still not what I’m personally looking for.  However, if you’re on the hunt for a good ribbon-flower-making book, with clear examples and good inspiration, consider picking this one up.