Participants in the Renaissance Hand stitching class at Grand TUA 2018

On April 7, 2018 I attended Grand TUA – The University of Avacal. This is an annual event consisting mostly of classes, though some social aspects, SCA court, and martial activities are also included. This year for the first time the Kingdom A&S (Arts & Sciences) Championship was also included. END_OF_DOCUMENT_TOKEN_TO_BE_REPLACED

Avacal (SCA) June Crown is June 3-5, 2016, and I’m helping with two Arts & Science (A&S) activities. I know that sometimes a wall of text on Facebook can be overwhelming, so I thought I’d also post here where I can format a little better and hopefully make it a bit more readable.

As a note – I don’t yet have the schedule for when these will take place, but you can follow this thread on Facebook to get updates.

Things I learned at TUA

Grand TUA just passed, and while your mind is still full of great ideas, have a chance to show some of them off! For this challenge, we’re hoping that participants will show off projects that were inspired by TUA classes!

The class does NOT have to be from this year’s Grand TUA, it can be from ANY TUA class you have attended during your time in the SCA. Research documentation not required, but please mark your entry with:

END_OF_DOCUMENT_TOKEN_TO_BE_REPLACED

This is a class I’ve offered for SCA Grand TUA in October 2015. I’m opting not to do printed notes, and instead am posting my “notes” for the class here, as below.

*Regular disclaimer – I’m presenting here as I’m aware of it. Any links to commercial services does not suggest you should buy from those services; they’re presented as informational only.*

Need something on your head? In this class I’ll discuss a variety of millinery (hat-making) techniques and options, share sources, and discuss pattern-making for millinery.

When talking about hat-making, there are two distinct styles of hats – dressmaker hats, and millinery. I’ll view them as two separate things.  Dressmaker hats being the kind of hats you can completely (or near-completely) construct on your sewing machine, with little underlying structure. Think of the Jorvik Hood, a goldhaube, a mop cap, or a touque. Millinery on the other hand has an underlying structure, or in itself is structured. Think of a wool felt top hat, a medieval henin, straw hat, bycocket, or a French Hood. 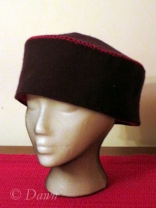 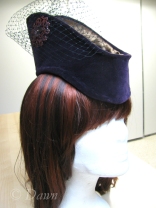 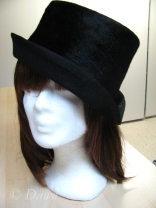 Green Felt millinery on the block with the tipper on top

The underlying structure, or the structure of a millinery hat can be made of several things. Some are period options, while others are modern compromises.  You might compromise because of:

Some of the materials you can use for millinery include:

This is an area I’m still working on learning more about.

13th century – The Museo de Burgos has a pillbox-style hat from 1255-1275 which is “embroidered with pearls, coral and trimmed in gold, sapphires and garnets”. The museum does not indicate any stiffening used in the hat, or what the underlying fabric is, though the extensive embroidery may provide sufficient stiffening to an already firm fabric. View this hat here: http://www.museodeburgos.com

1350 – a blue felt hat found in the Little Sampford Church in Essex has a formed, domed crown made of “blue felted wool, without any seams” and a sewn-on brim “covered in cream colored tabby woven silk in four sections, and gold wire.  Ivory colored tabby woven silk lines the the brim and the inside of the hat.  The brim has a red satin woven silk binding along the edge, and a cream silk and silver gilt cord.”   Read more about this hat and see Marc Carlson’s pattern here: http://www.personal.utulsa.edu/

1536 – the Waterford Treasures Museum has a cap of maintenance given to the mayor of the city in 1536.  The hat is described as: “The cap is made from red velvet, possibly imported from Italy, that is embroidered with Tudor Roses and marguerites. It measures circa 116 mm in height by 397 mm in diameter and contains a strip of whale balleen near the top of the hat for additional support.” View the hat here: http://irisharchaeology.ie/

1545 – from the shipwreck of the Mary Rose, three nearly-complete wool hats were recovered. Each has a double brim, and two have a “square silk lining and had a silk band between the brims”. View one of these hats here: http://www.maryrose.org/

1560-1600 – A hat mentioned in Janet Arnold’s Patterns of Fashion 3 is described as a high crowned hat with “felt base and silk pile” with an interlining of coarsely woven linen, and a black silk lining. The silk pile was worked by “six-strand plied silk” thread “worked in even rows round the crown”.  Another hat, from c1600 is described as being made “of felt covered with black velvet… embroidered with couched gold metal thread”. The hat was “moulded from thick felt” and the crest was “pinched together and stitched through at the base over the top of the head with white linen thread”.

Late 16-17th century – the Museum of London has a wool felt “workman’s” hat on display. This appears to be not much more than a cone hood with a folded up brim secured with a pin. View this hat here: http://www.museumoflondonprints.com

There are a number of different patterns available, both commercially, online, and you can draft your own.

Moulded hats, such as straws, wool felt, and similar hats don’t require a pattern, but rather require the material, tools for blocking, and steam and/or sizing.

Lots of costumers keep blogs and websites where they share their patterns. Some of these you’ll need to re-size for yourself, or use their examples to draft your own patterns. Review them and analyze if you think they meet your personal criteria for period authenticity.

Hat patterns can actually be extremely easy to draft, since frequently you’re looking at only fitting one small area of your head. 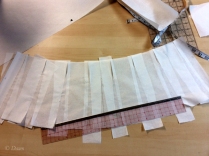 Different parts of the hat are flared to different amounts 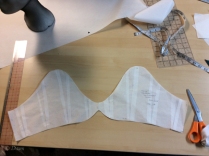 Cutting the shape into the flared hat.

Tracing off the pattern

Testing out the paper pattern

Techniques to discuss in class

How to attach millinery wire to buckram

Covering the edge of the pillbox with extra-wide bias tape to soften the seam. 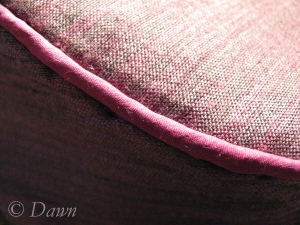 Padding the hat softens the harsh lines where wire and materials meet, like in this close-up 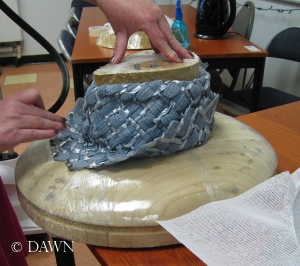 My classmate Rhonda shaping her straw

Hopefully you’ll be inspired to make interesting hats! If you’re interested to see what else I write about insofar as millinery is concerned, follow my “Millinery” category.  I show works-in-progress, for both historically influenced, modern, and vintage-inspired hats, as well as class work and museum exhibits featuring interesting headwear. If you’re on Pinterest, join me on my board specifically for hats & headwear.

Looking for inspiration? I love looking at Kat’s Hats – a re-enactor who makes beautiful hats inspired by paintings, effigies, and more, along with her client’s wishes. http://www.kats-hats.co.uk/

Leave any questions you might have in the comments below, and I’ll do what I can to answer them!