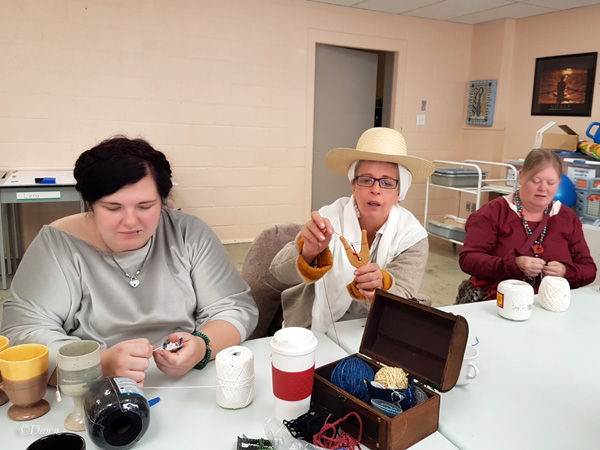 Lucet cord class at the SCA Festival of the SnowEaters

I attended Festival of the Snoweaters in October, and it’s taken me this long to get to the few photos I took to share them…

END_OF_DOCUMENT_TOKEN_TO_BE_REPLACED

I’ll be teaching a class at Snoweaters 2017, October 14, on how to make cord with a lucet fork. (Click the link to find out more about the event if you’re in Southern Alberta.)

END_OF_DOCUMENT_TOKEN_TO_BE_REPLACED

After trying my hand at making four-strand braid (aka Whipcord) I thought it would be interesting to try my hand at another cord-making technique.

Lucet cord is often attributed “as far back as the Viking age” – however in the bit of research I did online, it appears that there’s some disagreement if lucet cord was actually used in the Viking age. Unlike a lot of other braiding or cord-making techniques, it doesn’t require bobbins or pre-cut lengths of yarn – which means you can make a cord as long as you want – or rather, as long as your yarn is. (And as long as your patience runs too… LOL) END_OF_DOCUMENT_TOKEN_TO_BE_REPLACED