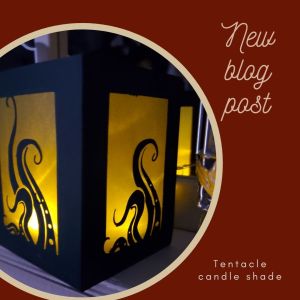 Back when the maker studio was open, I started a few different projects that I ended up putting aside when the pandemic shut everything down. I ended up filing a bunch of them away, but during spring cleaning came across one of them – this cute paper shade for an electric candle.

END_OF_DOCUMENT_TOKEN_TO_BE_REPLACED 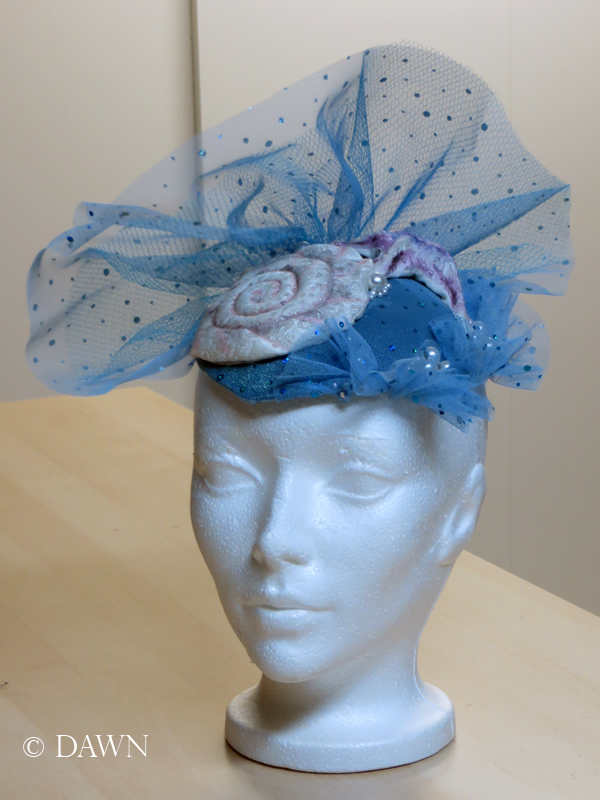 The cocktail hat or fascinator for my “Enchantment Under the Sea” costume.

I looked at hats from the 1950s and saw they were as diverse as hats today (albeit probably more commonly worn than today..) I opted for a small fascinator/cocktail hat, since it was a “prom” dress costume after all. (Other common options were wide-brimmed hats which seemed less workable). I wanted the hat to look like a nautilus shell curled up, accented with things like starfish, netting, etc.. END_OF_DOCUMENT_TOKEN_TO_BE_REPLACED

Finished gloves or “hand – fins” for my costume – one shown face up, the other face down.

One of the hardest parts about this costume was the “gloves”. In the costume sketch, I really liked the look – but when I came to drafting the pattern, it got a lot harder to translate that basic sketch into something I could work from.

I wanted a fin-like glove, similar to Miss Tess’s sheer glove (below, from Pinterest) but I wanted my fingers to be free so I wouldn’t have to take the glove off and on in order to sip my drink, nibble on the delicious food I’m anticipating, or to do anything to help out with the party. END_OF_DOCUMENT_TOKEN_TO_BE_REPLACED 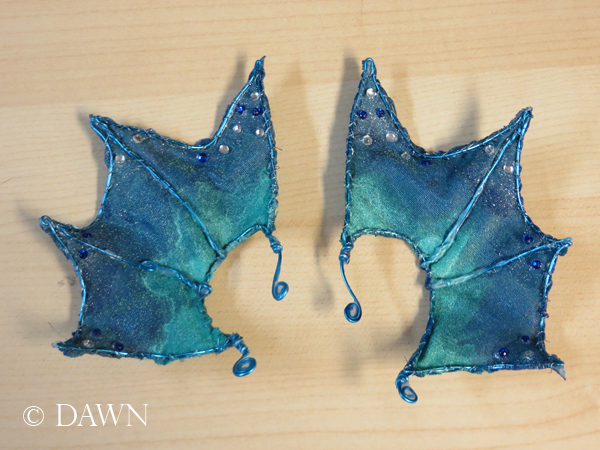 Completed ear fins for my Enchantment Under the Sea costume.

One of the elements I wanted for my Enchantment Under the Sea costume was ear-fins. I saw a few variations on Pinterest (some using wire, some using foam, some using paper) and decided to do mine in wire and fabric, since then I could match them to other elements on the costume which would also be fabric-based. END_OF_DOCUMENT_TOKEN_TO_BE_REPLACED

I’m auditioning three different ideas to embellish a hat I’m working on (my poor fingers…) and am hoping to get some feedback.

Here’s what I’m thinking of…

Option 1 – an ivory octopus cameo in a metal frame.

Option 2 – a red octopus cameo in a metal frame – I had to edit this photo; I don’t have this cameo, if I go with it, I’ll need to buy one. (Just pretend it’s the right shade of red)

What do you think? Let me know which option you think I should go with in the comments below! 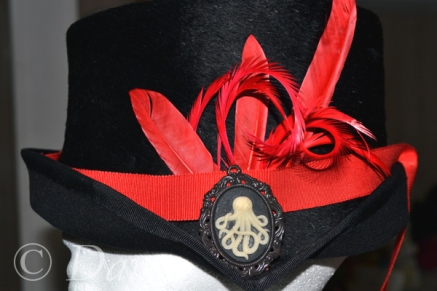 Option 1 – an ivory octopus cameo in a frame

Option 2 – the same octopus came, but in red instead of ivory

In case you’re wondering… this is a black fur-felt ‘topper’, kind of like the silver topper I posted about a while ago. It’s not quite a top-hat, since I’ve shaped the brim to have that cool, pointed swoop on the side.

Hopefully I’ll pick which version I want to go with (with your help!) and can show off the finished hat soon!