After finishing off the blue taffeta circle skirt, I quickly wanted to make the skirt up again in a new fabric – the pattern cuts up so quickly, sews up so quickly, and I’ve had a lot of fun wearing my skull-print skirt from before, and I love how it wears too – so once I was on a roll, I wanted to keep it  up.

From my stash of skull-print fabrics, I picked out another black and white skull print, this time a much larger print; much more white than black, but I still thought it would be cute.  Just like the original skull-print skirt, it’s just a cotton print, so it’s lightweight which means it should hang nicely with or without the crinoline under it.

The hem is a wide band of horsehair nylon braid, which gives the circle skirt nice shape and fullness – plus I didn’t need to worry about hemming the wide circle.

I really need to start taking photos in daylight! 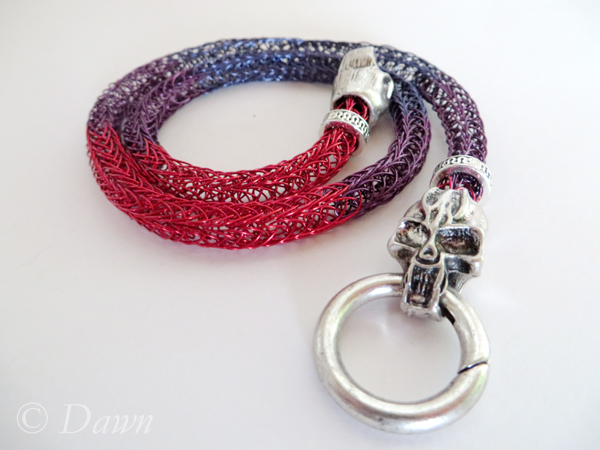 After working with some of the coloured coated copper wire, I thought it would be interesting to use more than one colour in a piece, inspired by a neat example on my Pinterest board.

I picked up three spools of coloured wire – each supposed to be 26 gauge – red, purple, and blue. I wanted to red –> purple –> blue –> purple –> red and so on so there would be an effect of the red and blue transitioning with the purple in between.  The colours didn’t shift and transition as much as I had hoped, but I still liked the effect. The chain is all double-knit.

Tri-colour Viking Knit while still on the dowel showing where the colours transition. 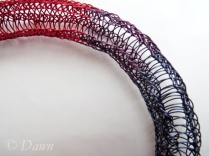 Tri-colour Viking Knit before going through the draw plate.

Tri-colour Viking Knit before going through the draw plate.

However, I found that the red was stiffer and appeared thicker than the purple and blue. I suspect that it’s actually 24 gauge, as it matched some of the other 24 gauge I had. I suspect the spool was mislabeled.

I ended up doing two lengths of red, one length of purple, two lengths of blue, one length of purple and so on since going back and forth with the purple would use more of that colour. I used about half a spool for each of the three colours. The end result is about 8 cm of red and blue, separated by 4 cm of the purple once the Viking Knit was drawn down through the largest hole in my draw plate.

The width of the finished tri-colour Viking Knit

When the Viking Knit came off the dowel, it was 56 cm (about 22 inches) long. I drew it through my widest draw plate hole, and the resulting chain was 80.5 cm (just under 32 inches).

I cut down the length that I needed for a necklace (a bit shorter than the previous other necklaces I’ve made) and finished the ends. From there I slid on two large-hole beads, and then added on two skull-shaped end caps finished with a round spring gate clasp. The end caps are attached with adhesive which is suitable for metal and jewelry items. 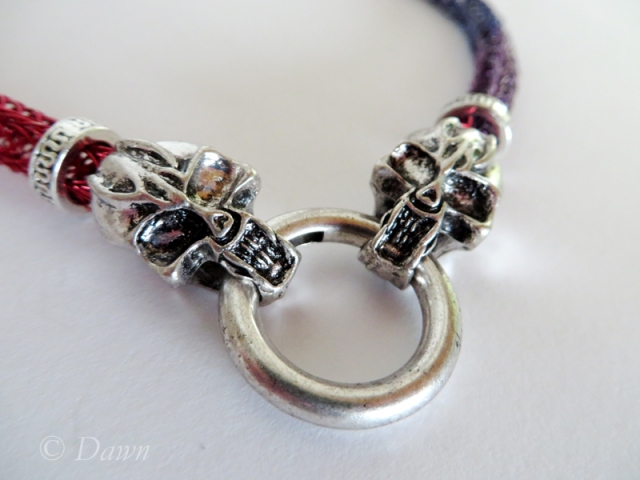 Another technique I’ve been wanting to try out since seeing at Suzie Q beads a while back is ladder braiding.

In their catalogue of classes, they describe it as “Chan Luu”-style ladder bracelets, but the technique isn’t new at all – in a bit of research it looks like a Vietnamese artist took a trip to India, and brought the technique to the public spotlight by charging hundreds of dollars for the bracelets to Hollywood starlet-types. (Check out some of the originals on the Sundance website: http://www.sundancecatalog.com/product/code/60585.do?code=OVLYCLK  or on The Find: http://www.thefind.com/jewelry/browse-chan-luu-vermeil-bracelet – where I especially like the chain version…)
END_OF_DOCUMENT_TOKEN_TO_BE_REPLACED