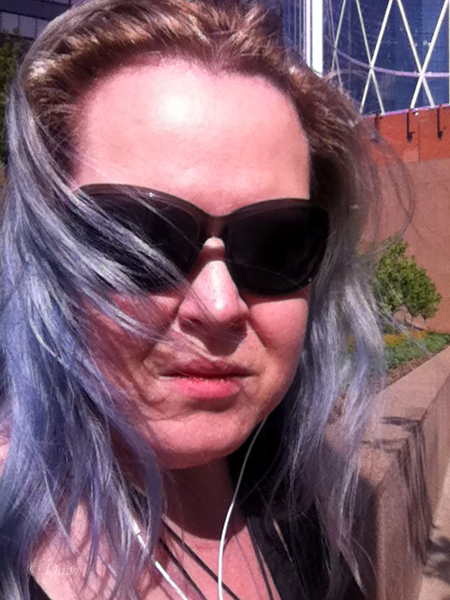 I visited Chatters a bit ago (to get more purple shampoo/conditioner) and a few hundred dollars later… I’d also picked up two new colour products. I thought I’d share them with you here, since my purposefully white hair  posts are some of the most-searched for posts on my blog…

First off, I tried Revlon Colour Crème in Platinum (#1002). This came in a ball-shaped pump container, and was stupid-expensive.
The swatch beside the stack of colours showed a wonderful silver-white for #1002, but I was a bit hesitant, because although it was stacked with the colourful dyes (and some of the other colours in the swatch were BRIGHT pink, orange, purple, red… just like Manic Panic and others) the labelling didn’t seem similar to the way other funky coloured dyes are often labelled. (http://chatters.ca/thicken-volumizing-conditioner-250ml-1.html) It was only once I got to the website that they mentioned it being a “colour treatment”, despite being stocked with “hair colour”.

(Check out Rufs & Kalufs for a full swatch of colours available to see what I mean) http://www.rufsochkalufs.se/2015/revlon-nutri-color-creme/

The product goes on towel-dried hair, then is combed through to saturate evenly, and left on for 20 minutes or so… They say you’ll only need a few pumps of the product, but they must have meant ‘per chunk of hair’, or if you have a thin pixie cut – because it took a LOT of product to fully cover my (long) hair.

The colour of the product isn’t too different than Manic Panic’s Virgin Snow (which I reviewed previously) and it went on reasonably well – not too drippy… I left it on much longer than instructed (out of habit more than anything else!) and… well… the results….

There was no perceivable change from my freshly bleached hair to the hair after I gently rinsed the Revlon Colour Crème out. Incredibly disappointing. It did make my hair nice and soft, but no more so than a deep conditioner like TIGI BedHead Dumb Blond Reconstructor (http://www.makeupalley.com/product/showreview.asp/ItemId=5843/Bed-Head-Dumb-Blonde-Reconstructor/TiGi/Conditioner)

I strongly don’t recommend this at all if you’re trying to tone your blond hair or go from blond to white or silver as the swatch would indicate. Really disappointing. It’s just hugely overpriced conditioner as far as I’m concerned. 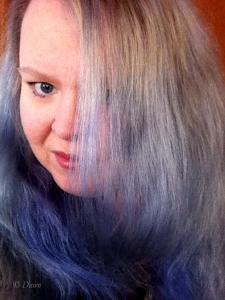 Next up, I tried Colour Intensity in the “titanium” colour. This time the swatch was a really lovely dark grey, that I figured would fade out to the silver I had in mind… and I don’t mind going bolder to start if there’s a nice fade out. (http://chatters.ca/hair/coloir/k-pak-colour-intensity-colour-titanium-118ml.html)

The product is slightly drippy – more so than Manic Panic, and it’s a bit hard to get all the product out of the tube… I also found that one tube only covered about half of my (long) hair, so I ended up doing an UltraViolet (Manic Panic) + Conditioner mix on the underside of my hair, with the titanium on the top.

I left the product on for about an hour, and as was recommended treated the product with heat to get more colour deposit. I don’t know if this made any difference at all though because….. 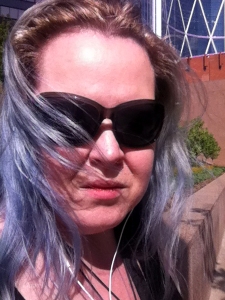 I found that the titanium hardly took at ALL to my roots, which was really disappointing. (you can see this really clearly in the photo on the left…) The colour of the ends wasn’t nearly as dark grey as the swatch in the store had been, but it pretty much quickly went to a green-ish grey (as if the silver had a lot of blue in it on top of the blond) which I didn’t hate… but didn’t totally love either. The hair felt really nicely conditioned though, especially after using my leave-in oil treatment. After two washes it faded to a less green silver, and the transition between the roots which didn’t take as much colour and the ends that did was a nicer, softer transition… (though it makes my roots look more honey-coloured than they were before).

My thoughts… it’s ok. I think I need to bleach my roots even further (which I’m a bit hesitant to do since they’re pretty darn light already and I don’t want to burn my scalp or fry my hair) I’d say that the swatch doesn’t really represent the true colour on very, very light blond hair, but perhaps it might make a nice colour wash on top of previously toned purple hair. It seems to fade out about as quickly as the Manic Panic + conditioner colour; maybe a bit faster. 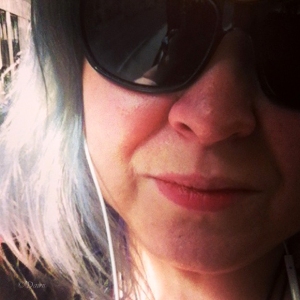 Above is a few days later I think – with Instagram filters, but you can see that the hair looks more white, less grey – but this tone only lasted perhaps 2-3 washes…

And now for something completely different 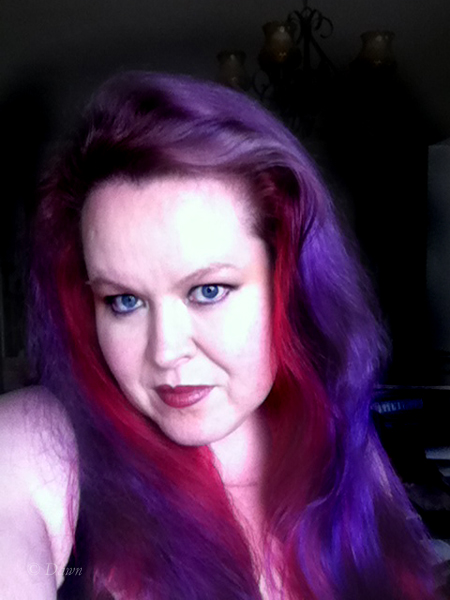 I was heading to a concert about 2.5 weeks after the titanium, and wanted to refresh my hair.. I ended up using Punky Colour in Poppy Red on the underside (love the colour, but my shower doesn’t… ick!) and then Manic Panic Ultraviolet on the top. Both were mixed with conditioner to bring them down a bit, but as you can see, they’re pretty intense.
I actually love having bold colour again, but I think I’ll let it fade and go back to white-blond again soon enough. I just need to get to Sally’s for some more powder bleach soon! 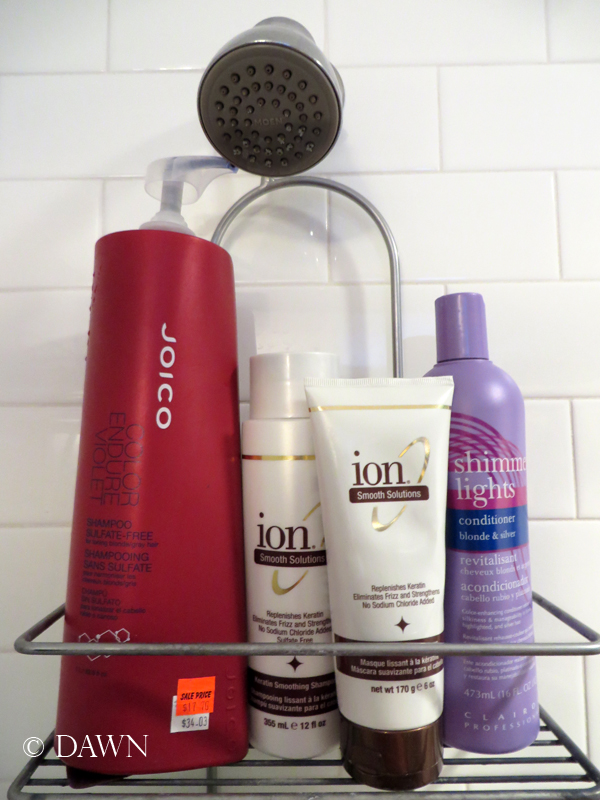 Since going super-blond/white blond, I have had a few friends and acquaintances ask how I was able to bleach my hair to this degree, while still retaining the length and relative health of my hair. (As in.. it doesn’t feel like straw all the time.) Rather than try to remember all of the products I’ve used, I figured I’d make up a short post as a follow up to my Purposefully White Hair post a while back. (And yep.. other than semi-regular trims, I haven’t had to cut my hair at all since bleaching the heck out of it!)

I use two different kinds of shampoo & conditioner – one is for toning (keeping the brassy yellows out of my hair and keeping it white-blond) and the other is for condition/texture – basically to keep it looking and feeling healthy (even if it isn’t!)

All of the toning shampoos and conditioners don’t actually mean I get to stop toning my hair though with my own home-made dye+conditioner concoction to actually keep it WHITE (or pale lavender). If I don’t do that extra treatment, my hair goes back to being just super-light blond instead. 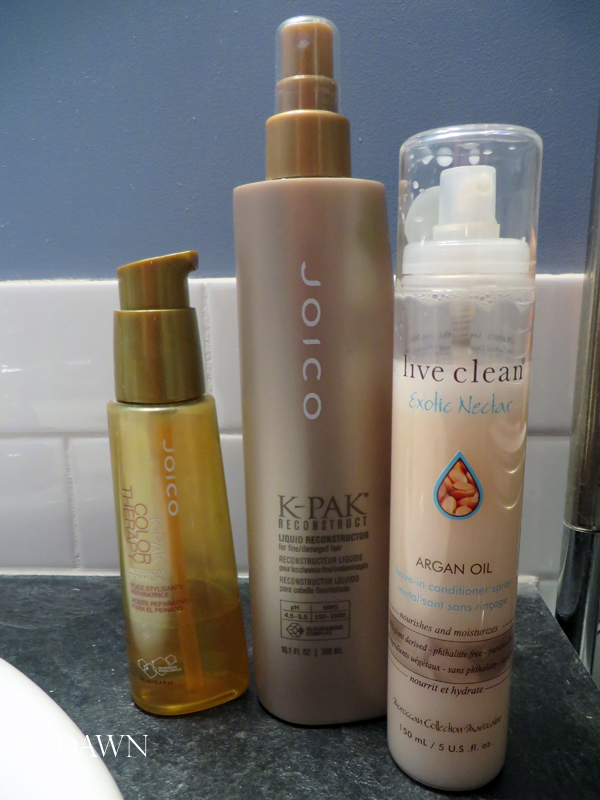 Leave-in treatments I use

What are your tips and tricks?

So.. if you’re thinking of going white-blond, super blond, white, or silver… maybe some of these products will help! Share some of your must-have products or techniques in the comments below!