While I was making some of the other necklaces, I also started up or finished off a few other projects too.

I often wear multiple silver pendants at a time, and since I had a few pendants that I hadn’t corded up yet, I thought that putting some that coordinated together would be fun…

I started off with a pile of ankh pendants. Most folks who know me, know that I consider the ankh my ‘personal icon’ so to speak. Think of it like a logo-symbol for me.. I ALWAYS have an ankh on me, one way or another, even if you can’t see it! This means I tend to collect things with ankhs on them, including multiple ankh pendants.

I roughly figured out how long I wanted the shortest pendant to hang, and the maximum length for the longest, and cut my cord in three lengths, long enough so each pendant would have enough space between the one above/below. The pendants and spacer beads were threaded onto the cord, and the crimps ended the cord – and then were attached to the connector with a split ring.

Then I attached the remaining cord for the necklace to the connector in the same way, and attached the closure. (Measuring for the final length first of course…)

Although the pendants are all slightly different tones of silver, I think that the spacer beads unify the whole thing…

Next up I had three star pendants – all out of my “stash” so I don’t actually remember where I got them from originally – though I’m pretty sure the one with the gemstones I bought from a place I used to work.

I essentially did something very similar for this one, with a slight change.  In this case instead of attaching all three layers to a connector, I used a ring crimp on the ends of two of the layers of cord, and with some tube crimps, strung them onto the third layer –crimping above and below to keep the lengths in the right place.

Then I slid a bead cap over each crimp combination to cover up the crimps.  I also made the necklace adjustable with knots rather than adding a clasp – since I prefer to avoid clasps when I can (because of my metal allergy). 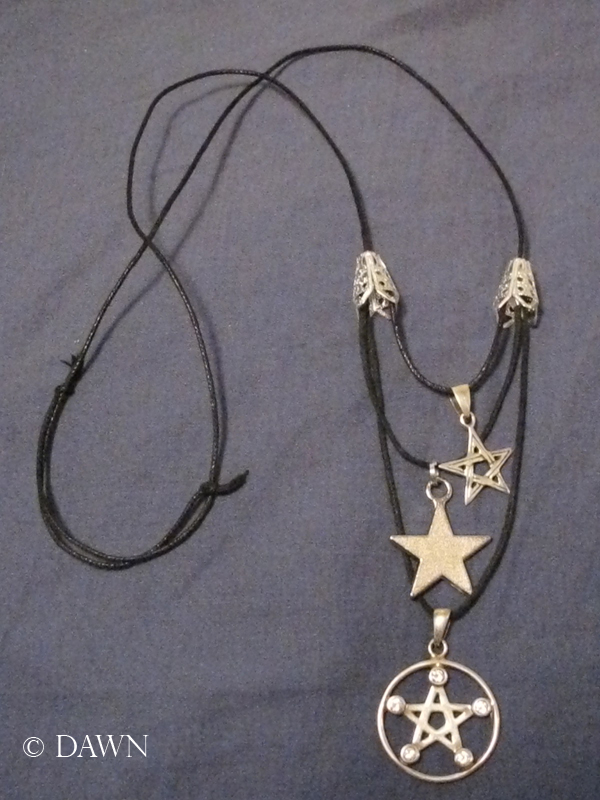 I picked up the bottom of this necklace at the same time as the bottom of the Tori style silver necklace, but didn’t get the chance to make it up until later – because I needed to pick up a few crimps to finish the job properly.
To make this necklace, I:
1. Removed the large jump rings on the end of the necklace bottom.
2. Attached a toggle ring to either side of the necklace bottom using the remaining jump ring.
3. Attached the bar end of the toggle clasp to either end of a length of leather cord using crimps

As I mentioned in my previous post about the Tori style silver necklace, I picked the bottom of this necklace up from Michael’s craft store using a coupon – always nice to regularly get coupons to save a few dollars at Michael’s, considering how much I shop there!

Since learning how to knit not too long ago, I keep checking out the yarn sections of craft and department stores.  A while ago I saw a great sample in Michael’s craft store, and since the instructions were included on the back of the label, I picked up a ball of the yarn and  thought I’d make up a ruffled scarf like the sample in the store.

Although the instructions suggest using 5.5mm / size 9 needles, I ended up using size 6 needles (mostly because I didn’t see the “size 9” until afterwards, and didn’t understand conversion… (and my borrowed needles are labelled by size, not mm) Oops.

Following the instructions I started ‘casting on’ 10 stitches, but then didn’t really understand how to knit the scarf itself. So – YouTube to the rescue!

After watching the video, I understood much better how to knit the scarf, and was surprised to see how quickly the project came together. (Just knit/garter stitch)  In one evening I completed the whole scarf.

I can’t foresee myself making a second one of these scarves, but I think if I were, I’d probably make it narrower to begin with (casting on perhaps only 6 stitches instead of 10).  The only reason I don’t imagine I’d make another is simply that it’s pretty unique, and having more than one wouldn’t be necessary.  It is also kind of boa-like – so if you are against wearing feather boas (maybe you dont wear feathers, hate the fluff, or are allergic?) this would make a god substitute if you knit it a lot longer, and perhaps just in one colour…

I was over at Michael’s the other day, and not only have they restocked my initial find of gears, but I also noticed that their new(ish) stampings selection has some gears and clock/compass faces and clock hands too.  (Though the hands are very simplistic.)  Though I’d share for all the steampunks out there hunting for gears!

A while back I noticed that Michael’s craft stores were selling a new line of jewelry parts – this line ‘designed’ by soap/reality actress Tori Spelling. Nope, I’m not a fan of her in any way – but two of the pieces did jump out at me as being interesting enough to grab – and when a few weeks later I had a coupon to get them cheaper (they are kind of expensive compared to the other jewlry items..) I grabbed them.

The first up is a bib-necklace bottom with silver beads and chain, while the second is a series of hematite beads on a chain. I was feeling crafty the other day, and thought I would make up one of the necklaces.

Since I’m allergic to metal touching my skin, I generally limit the amount of metal in my jewelry – so wanted to either use leather cord or ribbon for the necklace, and settled with some really pretty black sheer ribbon for the silver necklace. (The ribbon was leftover from another project, and I’m not sure where I got it.  The clasp and ribbon claws are also from Michael’s.)

1. I looped the ribbon through the necklace ends, and finished them with a ribbon claw. This basically pinches the ends of the ribbon together and provides a place to attach the clasp. I rolled the ribbon under the claw though to give it a little extra grip, and dropped a tiny drop of clear glue into the claw as well for extra security.
2. From there I attached a toggle clasp to either end of the necklace with a split ring (rather than a jump ring, just for extra security). It was only later that I added an additional ring at the bar end of the toggle clasp to make the necklace easier to do up.
3. Then I took a length of ribbon and wound it loosely, with a few twists to make it stand out, around the top chain of the necklace. This was mostly to tie the black of the ribbon back into the rest of the necklace. I attached it at the ends with knots that kind of hide under the ribbon (though I’m not so concerned with that) and a drop of glue in the knots.

I think the result is pretty good – now just to wear it!
If you would like to make one of your own, the necklace bottom is style “TSP-33 Bib style silver”  if you are looking for it online or in store.