I’ve recently become more and more interested in felting – nuno felting and needle felting in particular.  While I was on Vancouver Island, I did a fair amount of shopping in yarn/knitting  and fabric stores, and wanted to continue while I was in Tofino.

Unfortunately, Tofino has a number of galleries and artisans, but there weren’t a number of supply shops – which isn’t surprising, it’s a very small town on Vancouver Island that although isn’t ‘touristy’ (in the way that Banff has become, for instance), obviously has discovered the tourist dollar and there seem to be more restaurants and hotels then people.  (I’m exaggerating, but there were a lot of restaurants!)  I first saw a fabric store (which happened to be around the corner from a place where we took a whale watching tour) and wanted to head in, but was disappointed.  They had a very, very small selection of quilting fabric, and even less fashion fabric.  It’s obviously a VERY new store, because half of the shop itself was devoted to classroom space, and I can’t find them online at all.  In the location where I would expect to find them on Google Maps, there’s a bake shop listed instead.  (Approximately 421 Main Street).  We were in and out within 10 minutes, though I can see it will be a charming space once it has the opportunity to establish itself.

Since I didn’t see anything there, I headed to a little shop on the next block called Knits by the sea – which also is a very small shop but seemed to be better established.  (They boast on their website about being voted a favorite new business for 2010, so they’re pretty new themselves!)  They carried mostly commercial wool, with a small selection of hand-dyed and spun skeins from local artisans.  They didn’t have much in the way of roving (which was what I was more interested in for felting), but they did have a number of little needle-felted animals (ones that would be local to the region).  I ended up picking up a kit for a North Pacific Giant Octopus.  The kits come with the roving you’ll need, two felting needles, some thread and a sewing needle along with some beads for the eyes.   Photo illustrated step-by-step instructions are also included.  I’m certain that the label said that the kit was supposed to include a piece of foam to work into (to avoid pricking your fingers) but mine didn’t.  Guess what I was doing while sitting in our hotel, watching the ocean the next evening?  Yep.. pricking my fingers!

(Oh, and in case you’re wondering, I did try to email the shop to let them know – but the ‘info at  knitsbythesea.com’ email from their website bounced back.. maybe they’ll find this post at some point?)

So… I’d like to introduce you to my new little 8 legged friend, along with his friend, a little starfish  (which I made blending the orange and the white wool together with my fingers).

Slightly out of his aquatic element, sitting by the window.

Close up of his little friend

If you happen to know the name of (or even better, a website for) the little sewing shop around the corner from Crab Apple flowers – please let me know in the comments below!

Or, if you’re in Tofino, you can visit Knits by the sea (or if you’re not, they have online shopping too…)

So in the recent post “Elegant Steampunk – Victorian purse” I mentioned that I ended up making a second purse after the first one, because the first was so incredibly small.

The most challenging thing about making my own (not from a kit) was finding the purse hardware.  I almost bought a ready-made change purse, just for the (incredibly plain) frame, before finding another frame in a craft store (in Abbotsford I think… but I don`t remember anymore).  This time bonus – it was silver-tone instead of gold-tone! Much nicer for my wardrobe!  Subsequently I`ve picked up a few other small purse frames as well,

I enlarged the original pattern, keeping the shape and size of the new purse frame in mind, and cut the fashion fabric for the purse out of black silk velvet.  The lining I cut out of silver taffeta.  The embellishment on the front of the purse is another printed portrait, then black chainette fringe, black rayon lace, and then topped off with deeply dyed (no more pastels!) rayon lace.  The top and bottom lace motifs were lace appliques, while the remainder were   just rayon lace trim by the meter, cut into appliques for the project due to the scale – not actually purchased as appliques.  I accented the lace with small dark beads – the kind that always remind me of an oil spill – the colours shift from green to black to purple.

The opening of the purse, along with some baubles I decorated it with.

The frame was a sew-on type, so after finishing the purse and the lining, I sewed the frame onto the purse, and then found very narrow black gimp braid (It`s hard to find the narrow version!) and glued it inside the frame to trim the raw edges. I attached a proper purse chain with hooks into the purse frame so the chain could be removable, and then added a gorgeous skeleton key on a chain to the strap as well – though it`s not fuctional, just pretty!

What do you think?  Do you like the black or ivory version better? Reply in the comments! 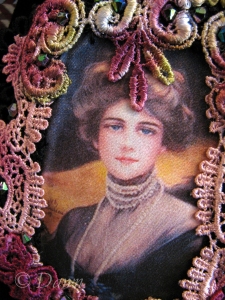 Close up of the portrait

The notions you’ll need for corset making may seem unusual, unfamiliar, or hard to find.  A lot of people substitute out less expensive or more readily available alternatives for the “correct” notions with various degrees of success.  If your first corset will be a one-time-wear for a comic book convention (and you have three other costume changes for the weekend), or if you don’t intend to wear it much until you perfect your pattern and skill – these alternatives are fine.  However, just like with a lot of things, using the correct tools for the job will likely give you more consistent and enjoyable results.

After picking out your fabric, you’ll need:

Ribbons and fabric and cord - oh my! Creative ribbon storage by Sew Many Ways

Most of these items you can find at your local fabric store, while others you may need to travel to a specialty store or order online to purchase.

Find at your local fabric store:

You may be able to find these items at your local fabric store, or you may need to go to a specialty store for these:

You likely will need to order these items unless you live in a major center:

Hopefully you’re not feeling overwhelmed!  If you need me to explain any of the notions you’ll need, let me know in the comments below!
If you’re  just joining me… click the Corset Class category (on the right hand side, or this link) to read all of the posts so far in the Corset Class.

Inside Knotty By Nature

Sorry for the terrible photo – this was a quick iPhone snap before I totally forgot to take a photo at all…
While in Victoria, I was in Gala Fabrics and happened to mention to the owner who was assisting me that I was interested in nuno felting and needle felting, and she suggested I head to Knotty By Nature.  I hadn’t even really thought about looking for wool batting, and hadn’t added this shop to my “want to visit” list, but since it was very close, we headed over a few blocks and checked it out.

I’ll admit, as a novice, I was a bit intimidated by all of the selection of various fibers (along with a selection of yarn and spinning supplies) but the gentleman working in the shop was understanding and helpful, and told me a bit about how the shop operates.  There were pre-bundled batts (I picked up one in shades of blue, another in blues, greens, purple, and black) and then there were braids of solid coloured wool batting as well – each is 2 ounces for 6$, and you can take as much or as little as you like!  There is also a bucket under the rack, with the leftovers, so if you only want 1 ounce of something, you can look there first.  In there I found a gorgeous blend of wool and angelina fibers (which bond to one another but nothing else with heat, and sparkle!).  I was tempted to get a grey as well, but I still have some grey left over from the nuno felting project – I think it will look great with the blues…

The shop also offers a community carder, as well as a range of really affordable classes.  Of course, since I’m not local to Victoria, I’m out of luck, but if you’re in the area (or are heading there) it might be worth checking out.  It reminded me of a smaller, more intimate version of our local Shuttleworks (or near-local… since it’s not actually in Calgary..)  If you ARE in Victoria though, check out BitchyBees – a knitting group in the area with a LiveJournal presence.

Now, just to make something up with all of this gorgeous wool!

P.s. Yarn bombers – check out the photo of the bike that sits in front of the shop!

For the blogroll – Knotty by Nature has their own blog that looks interesting (I’m heading off in a minute, and will have to remember to head back there to read more later!) The Straight Male Knitter was blown away by the shop too, (and by the sounds of it, like me, a little intimidated by everything there), and the Fiber Sauvage comments on a class at Knotty By Nature. 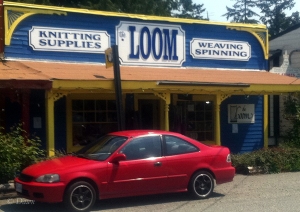 While driving up to Nanaimo while on Vancouver Island, we stopped at a set of little shops off the highway – mostly lured there by the promise of fresh fudge (FYI, it was awesome… I recommend the chocolate ginger) and found this shop called “Loom”.  I had just come from Victoria, where I had picked up some wool batting, and I was looking for more.  Unfortunately while I was there, there wasn’t anywhere near as much wool batting as I’d seen previous (or at least, not coloured which was what I was looking for… I’m not up to the task of dying my own wool, carding it and all the rest yet!).  However I did find LOTS of other luscious things.. which I’ll blog about separately.  For now, let me just give you a little tour! 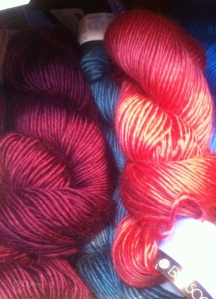 Such luster and sheen in this wool/silk blend!

This iPhone photo totally captures the sheen of the silk in these colourful skeins of wool/silk blended yarn.

Racks of colours from Loom

There were shelves upon shelves (up to the ceiling!) of commercial yarn, but there were also a few baskets and selections of hand-spun wool as well, and yarns from what I presume are local spinners.  I couldn’t find much online about Loom, but here’s a post from Jenn’s Yarn Addiction with lots of photos too!

There were also the requisite swatches of  different yarns knitted or crocheted up into squares, but better still were the samples of actual (small) garments.  I totally fell in love with a neck cowl in a combination of black, purple, and blue.  Ah.. if only I could knit!

(In a little area called Whippletree Junction near Duncan, BC)