Like at Twelfth Night, I wasn’t able to take much in the way of photos at Avacal’s Coronation and the Kingdom Arts & Science Championships because I was swamped trying to do other things. Luckily, one of the local photographers (Beothuk)took MANY amazing photos, and published them publicly online.

All photos are direct links from his Flickr feed – if he removes them, they’ll break here. All copyright his.

Working behind my table on the blue Finnish hat on the table. Super-focused on coils while my trichinopoly is in the foreground. 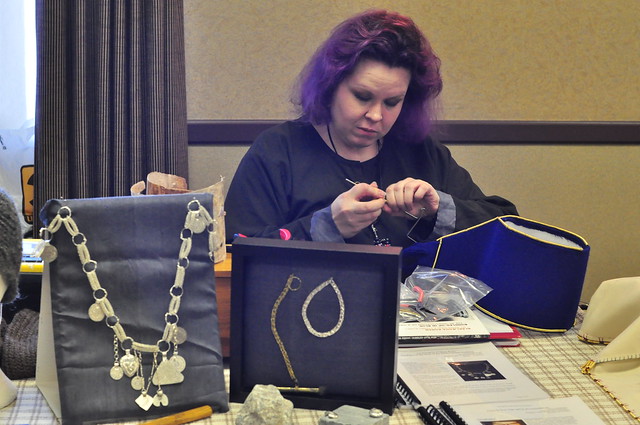 END_OF_DOCUMENT_TOKEN_TO_BE_REPLACED

In my earlier post “Viking Knit on Fabric“ I showed off a single-knit trichinopoly chain on fabric. In that post I mentioned that I wanted to try off a smaller dowel, and double-knit to see if that improved the result. I did in fact have the chance to do that, and I wanted to share the photos with you.

“My next step after this is to use a smaller dowel, and try double-knit instead of single-knit to see if that improves the result.”

I did this with 26 gauge silver-plated copper wire, on a dowel just smaller in diameter than a pencil, on coat-weight wool (like Melton cloth).

The result is definitely more sturdy than single-knit, though I am not sure it’s quite sturdy enough to really act as protection to the edge of a fabric cuff…

Thor’s Hammer from the Vikings in BC exhibit

I don’t know much about the Viking Heritage Magazine, but I wanted to record some links while I have a moment to return to it later.

01/1996 – Link to PDF
Agricultural development and early urbanization in the light of environmental changes in
Curonia 600–1200 A.D
The historical links between West Russia and Scandinavia
Certain Historical Facts on the Routes of the Vikings on the Belarussian Territory
Heritage News from Sigtuna museum

s/1996 – Link to PDF not yet found
The Viking Ship Sigrid Storráda
Viking Ships for export
A Viking Village in Överhogdahl
Assur’s Village in Upplands Bro
A book about the history of Trelleborgen
A new Viking Museum in the North of Norway
Viking Play on an island in Eken’s Archipelago
New Treasures
Even the Vikings used to write graffiti
Save the Viking pine!
New-rich in Russia are buying valuable archeologically ground

END_OF_DOCUMENT_TOKEN_TO_BE_REPLACED

In late March I entered (last second) the competition for A&S (Arts & Sciences) champion of Montengarde (Calgary’s SCA barony) taking place in mid-April. I figured that I’d enter my “Purse shaped like a lute” as well as some Viking Knit chain. While I was more interested in the technique than a period finished item, I figured that for judging, something that looked period (beyond the technique itself) would be a good idea. I ended up taking some of the chain I had already made (silver-plated copper double-knit) and had not yet allocated to another project, and trimmed it into eight pieces of one length, and four pieces of a slightly longer length (leaving a short amount left over which I used for something else).

To join the pieces, I first decided to make  my own rings (seen below) from wire – but I didn’t have heavy wire, so I took wire and twisted it to make something heavier. The rings I made were pretty, but closing them was less pretty…

For my second version, I used store-bought large rings, which was ok… I even took it to an A&S gathering and got good feedback from the people there. Still, I was a bit unsatisfied. I kept thinking “I won’t wear that, because I don’t trust those rings…” So, that meant they had to go. I picked up some heavier wire (18 gauge), referenced a photo of the originals, cut my wire into pieces, hammered the ends, formed them around a ‘mandrel’ (a highlighter…), strung them through my wire chain, and wrapped them closed, very much like the originals.

The finished chain length after going through the draw plate

Cutting the chain into pieces, the remnants of wire, and the first-draft rings

Second draft of my Hameenlinna-inspired necklace
I know I usually share a LOT more detail about my process… but I’ve decided to enter this into a championship… so instead of a blog entry – I have documentation!

Making the rings for the third version

For the third version I cut the 18 gauge wire, hammered  the ends (at the top of the photo above) and then curved the wire around the highlighter to get the shape.

Close up on the crystal pendant along with the wrapped connection ring (and a temporary metal spangle).

Close up of the finished (version 3) rings

Another view of the connection ring and how the ring connects my Trichinopoly (Viking Knit) chain. This connection also has a temporary metal round substituting in for coins – however I DO have some replica coins on order, from Alpha Officium. I placed my order on March 19th, but as of the time I finished my documentation, I didn’t yet have the order.

For that “big project” I mentioned earlier, I wanted to make a pendant similar to Viking Age finds – specifically a crystal pendant.

There are a lot of reproductions available for sale, (and I have one on order from a jeweller in Poland!) but I kind of wanted to make my own crafted item, so kept my eyes open for full crystal spheres. I couldn’t find one in time, so ended up finding two Czech crystal domes instead.

Taping the crystal half-domes together

side view of pendant

To start off I taped the two domes together with masking tape. I would have liked them to have a sharper edge, but these are smooth and rounded instead. From there I wrapped the edge with adhesive metal foil, cut triangles from the foil, and added in a split ring before doing a second wrap, securing down the triangles.

From a distance, it looks very much like the photos of the original find – which I’m really happy with!

Sneak preview of the project I’ve been talking about – featuring that crystal pendant!