I just thought that it would be interesting to share some of them here, likely to be added to later – since I only have a few photos! 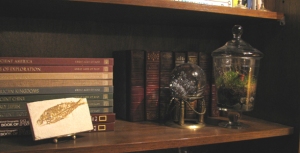 Fossil on a brass stand, crystal ball on a brass stand, and my beautiful moss terrarium.  The fossil – I don’t know where it came from, probably a gift store in Drumheller I’m guessing.  The crystal ball on the brass stand was given to us by my uncle – I remember when he lived in Vancouver, seeing it on his coffee table, but I always thought it belonged to his roommate.  I think it’s beautiful!  The terrarium – this past year I made a number of them for some of my closest friends.  Fields of moss in the forest always make me think of a lush fairy-world, and I love the little pathways filled with sunlight.  Plus, they always look so soft, as though you could lay down and sink into the moss like a featherbed.  Making these was an attempt to capture some of that majick indoors. (And yes, those are old National Geographic and Readers Digest books…)

A number of years ago we received a photo frame, trinket box, and table lamp

in stained glass as a gift.  A while back, the lamp broke, and we’ve been looking for a replacement.  A month or so ago we finally found one – it’s also stained glass, which is similar to some of the other lamps in the area.  I wouldn’t pick yellows/oranges/creams as a first choice colour-wise, but it certainly makes the colour of the light nice and warm.  (Mind you, this was taken with a flash which washes things out a bit…)  Show beside a wooden box dad made for us.  I’m sure someone who knows wood would know what it is, but I don’t.  He had a thing for beautiful woods though, so I’m guessing it’s something special, vintage, or exotic.

So 2 weeks ago I received the third purchase from my “lure of Etsy” mini-shopping spree, and I adore what I got!  I had every intention of posting sooner, but there were photos to take, and it’s been really busy around here! 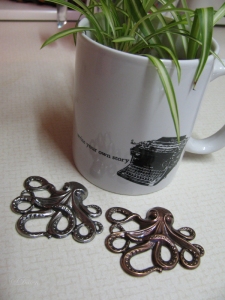 So here they are – one copper-tone, and one silver-tone octopus’, (is that the right plural form?) shown next to my little spider plant in my “Write your own story” typewriter coffee mug. (As an aside, I bought the mug at Michael’s in their $1.50 bin for specifically this purpose, and the plant is doing well. I wanted to take it to work when I knew it would be healthy, since I killed the last one at work.) The octopus’ are actually pretty detailed, and I’m really happy with them.

I am not totally sure how I’m going to use them right now – I think one will become a pendant and the other go onto a fascinator/hat, or become a pin perhaps.  I had mentioned it to an acquaintance at a recent pot-luck dinner party, and saw her on Friday night, so I strung the copper one onto a satin rattail cord for the time being (to wear it as a necklace as a quick-and-dirty solution) and I like it that simple for the time being.  Not being able to wear chain necklaces really does impede me sometimes – because the copper chain I used for my mini-pocketwatchwould work really well with the copper octopus….

I’ve included a shot of the octopus’ beside a ‘loonie’ dollar coin so you can get an idea of the size.  Pretty large considering, however still not nearly as large as the other recent octopus that joined my accessories collection!  The shot is also a bit closer up so you can see the detail in the little guys too.  Overall, I’m really happy with them, and think that if I can’t decide exactly which will become what, that I might get a few more to have more options… (ei: a silver and a copper pendant, a copper and a silver pin, etc..)  Lately I’ve really had a ‘thing’ for octopus accessories it seems!  (Which all started with my octopus/Cthulu image pendant.)

Just to show the scale

On another happy note, I planted my tomato seeds in little mini upcycled greenhouses today – crossing my fingers that they grow – there is still a lot of snow on the ground, but I can feel Spring coming…

Well I tried to update my theme to the new “Choco” theme that came out today – it looks like stitched leather and has more options… but… all of my linked images exploded!

So.. back to the Quentin stand-by.  At some point I’m sure to figure this out better to have it work the way I would like to!

So rather than just posting more of the musical links into the comments of my previous post, I figured that I would do yet another post on inspiration/culture – though this time devoted entirely to music.

First off, another ‘popular’ (seeing as I know very few people in person who are really into the whole Steampunk sub-culture, I can only go by what I read on the ‘net) artist is Dr. Steel.  I figured that listening to a few of his tracks through YouTube (either his own videos or user-created/loaded tracks) would be a good introduction…

The verdict?  Well, I really like this song (erm.. parts of this video are more story-telling, and kind of interfere for me, but whatever!) however listening to a number of other songs, watching other videos – I can’t really say that I’m a fan.  Oh well.

Next up – Clockwork Quartet.  This is one that was a suggestion – though I can only guess it’s a random suggestion, vs. a personal one, because I didn’t care for it at all.  😦  I can see this music accompanying something musical-theatre-ish (The Doctor’s Wife sounds like something out of Repo! the Genetic Opera actually). But to listen to – naw.  Just not my style.

Up next in the list is the Unextraordinary Gentlemen.  There are a few videos from them on YouTube – though almost all of them are live recordings.  While I can see the appeal if you are a fan, hearing a band play live (on video), I find that when I’m actually trying to LISTEN to the music, it’s a huge disapointment.  Even bands I quite like, I have very little interest in fan videos from their live performances.  Perhaps I’m  a snob, but I think that cleaning things up in studio has some serious advantages.

So, with that, I found ONE fan-made “video” with audio from an album.  Take a listen – what do you think?  To me, it’s nice background music, but nothing memorable.  It’s not interesting enough for me to be all that interested in the lyrics, and other than the violin and some of the ambient noise, it’s not all that Steampunk or NeoVictorian either…  Of course, it would be a shame to  judge the entire group on one song… but until I see a bit more availale that isn’t noisy dirty live recordings, I’ll stick with this…

The Cog is Dead – The first song I listened to was “Death of the Cog” which, like the Clockwork Quartet seems to be more musical-theatre lacking the theatre, than music in and of itself.  Oddly enough I liked this better somewhat – but not something to actually sit down and listen to.

While the artist has only loaded up the one video, a fan has loaded up the songs with fan “videos” as well, so I took a listen to a few others, including:

Which yah, gotta say, I dont care for all that much either.  Just not my taste.

Vernian Process – ok… this is another ‘storytelling’ kind of track – though I’m getting it a bit more I think than some of the earlier ones.  Still… not my taste.  Sharing for the sake of sharing.  Perhaps I’ll be able to come back to this in time and appreciate it more?

I think with that, it’s time to sign off for a bit.  Perhaps the next time I come back to this theme, I’ll have more time to listen to this last artist, and also find some samples of Sunday Driver, The Men That Will Not be Blamed for Nothing, and others…

So, after doing my own mini-pocketwatch, I was out at Michael’s the other day, and saw that they’re now carrying a LOT more watch parts than they were before.  In the past, I’ve seen them there, but they had only one or two styles, and they were in the 30$ range.  (Of course, I almost always print off the 40% coupon from their website or clip out of their flyer, but still….)

Now, they have a huge selection up – and while most of them are for typical watch-bands, there are TWO that are pocketwatch style! One in silver-tone, the other in brass-tone.  I personally like my little copper one a LOT more, but options are always good! These new ones are about half the price, at $14.99 and $16.99.  You can click on the image for a larger version.

It does make me wonder though – who wears a watch anymore?  I haven’t in years  – because of my allergy to metal (and hence the back of the watch, the buckle, and in the all-plastic Swatch-brand watches, the exposed battery..), but I rarely see them on anyone else either, since everyone carries around their cell phones/Blackberry/iPod/etc.