A bunch of my friends have been posting a “SCA achievements unlocked” meme and I figured I’d do the same, but instead of posting it as a post on my Facebook, I thought I’d post it here so I could add links, and hopefully come back and update it later.

I’ve also opted instead of just doing yes/no, I’ve also decided to add a mark for things I’d be interested in / open to doing in the future… 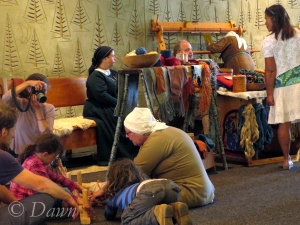 The Vikings marketplace at the Royal BC museum

END_OF_DOCUMENT_TOKEN_TO_BE_REPLACED

As the local A&S (Arts & Science) champion for Montengarde (Calgary) I’m hoping to put together a few A&S related TUA classes over the year at A&S practices and taverns (and some non A&S-related classes too). The first was the Naalbinding class I mentioned previously at May Tavern, and the next is a Block Printing class with Viscountess Morrigan on May 30th, 2016.

You do not need to be a SCA member to attend the class, being held at a private residence for A&S practice. There is no cost to attend. (However if you ARE interested in getting into the SCA, this is a nice low-key way of coming out and meeting some other people involved!)

END_OF_DOCUMENT_TOKEN_TO_BE_REPLACED

Back of the blue satin corset

I’m calling this a Throwback Thursday because this is actually a corset I made a while ago (so I don’t have any work-in-progress photos either). I made this to sell, back when I was hoping to get commissions for custom work (I’m not looking to do custom work anymore).

A bit about this corset:

This is a crepe-back-satin overbust corset in shades of blue. Crepe-back-satin has a slightly textured finish, it’s not a totally smooth satin, but still has a lovely, elegant shine. The corset is lined in black cotton, and has an internal waist-stay.

The corset is made in three shades of blue:

END_OF_DOCUMENT_TOKEN_TO_BE_REPLACED

On May 17 I published my entry for the Historical Sew Monthly May 2016 challenge – a pair of German hats (worn together). I’ve been pretty busy with a few different things so I didn’t get to the longer post about these hats until now.

Goldhaube and Tellerbarret worn with a mundane sweater (iphone photo)

I was inspired to work on these hats because the the (SCA) Royal Progress is Cologne for Silverwolf 2016. With this in mind, I wanted to attempt to make my first German costume. While I’m strongly attracted to the Cranach-style gowns, I thought that they might be too fitted for me to accomplish right now on short notice (since I would need a hand with the fitting). Instead I opted for the Landsknecht style, which nicely worked with the “holes” theme of the May Historical Sew Monthly challenge.

Like my Byzantine costume, which also had a short deadline and my Istanbul costume (likewise, short deadline) I didn’t do in-depth research for this costume; instead starting with Pinterest.

END_OF_DOCUMENT_TOKEN_TO_BE_REPLACED

For those of you who are in Calgary, I’ll be teaching my naalbinding class at the SCA May Tavern on May 25, 2016.
You do NOT need to be a member of the SCA to attend tavern, and if it’s your first tavern, it’s free! (If it’s not, it’s only $3 to attend).

Information about the class: