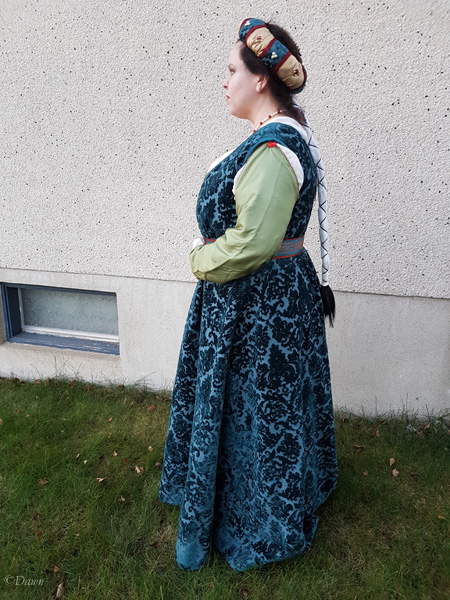 For Caterina’s elevation I wanted to make a Giornea – and overdress for the Italian Renaissance costume not unlike my previous Giornea. However, this time I wanted to try a different style, with an open front rather than open sides. I thought that this would be flattering, and would nicely show off the under dress (Gamurra).

I started by making a “muslin” or test garment/ mock up. I used a red and gold scroll home decorating fabric, which I’ll blog about soon. (Click the 1480s Florence tag to see all of my Italian garments.)

Concept sketch for the overdress. I ended up not adding the trim at the hem, and did a belt with a splash of copper.

Once the red and gold garment seemed to work out well, I made some adjustments to the bodice pattern:

For cutting the bodice, I cut the front and side-back as usual. For the centre back I really wanted the main motif to lay across the back seam. I basted along the centre of a motif, lining it up with both layers of fabric.

I also made the skirt differently. Instead of using simple trapezoids, I did a curved skirt. Each panel had to be cut out individually, because the figured velvet has a one-way design.

In retrospect, I should have cut the skirt first, and from the leftover cut the bodice – it would have been a better use of fabric. 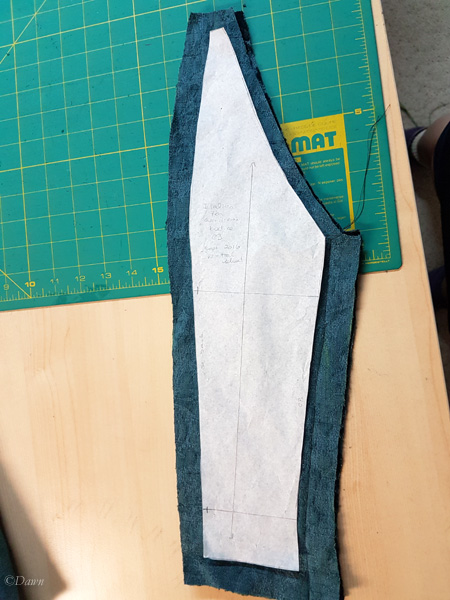 Cutting the center back – note the different seam allowances on the centre back seam, waist seam, side-back seam, shoulder seam, and the neckline.

Sewing the teal figured velvet was also a bit more challenging than the red and gold home decorating fabric. Velvet tends to shift a lot when you sew it, so I had to pin the pieces a LOT more than I normally would.

Although I really wanted the motif to line up properly on the centre back, it didn’t. I thought about re-cutting the pieces, but had done a lot of fussing with the basting, and really wasn’t up for it. I also wasn’t 100% sure that I COULD, since the back seam is not totally straight, and the way the pile of the velvet is, it might always shift.

I rarely sew with this many pins, if any at all… But velvet is super tricky to work with. Of course I could hand baste the seam and then machine sew them to avoid all of these pins but….no. #sewing #dressmaking #dress #homeMade #handmade #costume #cosplay #SCA #DIY #velvet

For the lining, I used lightweight navy blue linen. I’ve used this fabric a bunch of times before (I bought a roll of it a few years back when it was a GREAT price), and know that it’s soft, strong, and wears quite well. Unfortunately, I had hoped to cut five skirt panels of the lining and fashion fabric, but there was only enough of the blue linen for four. Five would have resulted in a fuller skirt with more pleating, but I hoped that the fullness of the cut would suffice.

I sewed the bodices (fashion fabric and lining), and skirts (fashion fabric and lining), and stay-stitched the armholes, waists, and front openings/necklines of each. From there the bodices were sewn to the skirts, pleating the skirts a little bit (though not as much as would have been if I’d used five panels instead of four….)

Trying out a method of finishing raw edges on this cotton figured velvet but I haven't tried before. Basically with him on another piece of cord. The cord doesn't have to match since it won't ever be seen in this lined garment, and I figured it was the least likely to bleed… Just in case my cord wasn't colorfast. The teal thread however is silk and is a close enough match to the fabric color that I hope it works. #handsewing #homeMade #DIY #costume #cosplay #velvet #SCA

Since the bust dart (which has very limited documentation, but has some!) was very large, I slashed the dart and finished the edges as above, to distribute the bulk of the dart on either side at the waist.

I didn’t interline the velvet, but the skirt seemed REALLY heavy, so I used wide twill tape to reinforce the bodice seams, into the skirt seams. I hoped that this would help support the weight of the skirt through the bodice.

Twill tape sewn to the front opening of the gown

Once both layers were ‘complete’, I sewed the two layers together at the neckline/front opening and armholes.  I planned to bind these, and although they had already been stay-stitched, I hoped that the extra stitching would help keep the layers (particularly the velvet) from shifting.

I also added twill tape to the neckline of the bodice, to keep that layer from stretching out with the weight of the skirt. I noticed when I did it though that it caused the neckline to warp slightly. I hung the gown for the skirts to hang out for about 24 hours, with the plan to re-evaluate the neckline after it had hung out.

After hanging the gown

After letting the skirt hang out, Caterina came over and we helped one another mark  our skirts for hemming.  She marked my skirt with pins which I transferred to chalk when I got to work on my cutting table, and then ran a basting stitch through both layers while going back and forth between the table and hanging (to make sure the lining hung correctly within the skirt…

Marking the hem with chalk, basting, and cutting off the excess fabric.

I was really glad that I cut the skirt a good length – there was very little to trim off, and both fabrics seemed quite stable, without much stretching from being hung.

Next, I cut 5″ wide strips of linen on the bias from the same linen as the lining. These were sewn together, pressed, and one edge folded and pressed. This is the hem facing, and I sewed it to the hem of the dress by machine.

NONE of the colours in the photo below really match the real colours of this dress/lining!

Sewing a 5″ wide hem facing to the hem of my teal overdress.

With the hem done, it was time to bind the armholes and front opening.  I didn’t want to buy any new fabric for this project – partially because I have lots of fabric, but also because I’m really tight on cash right now… so into the stash I went!

The top photo shows three synthetic silks. Left is a pale blue shot with yellow for a cool golden teal, the middle is green shot with black which I used for a sideless surcoat, and the right is a teal shot with black… which of those options I liked best.

Next I went into my stash of silk clothing to recycle, and pulled a green silk – but comparing it to the synthetic (bottom photo) – I far prefered the look of the synthetic silk instead. Obviously this isn’t the period-correct option, but it LOOKS better, and since the figured velvet is cotton, and not silk (which it would have been in period) I figured this was a totally acceptable choice. I also really didn’t want to go shopping for this colour in silk – I was hoping not to spend too much more out-of-pocket money on this project, and wanted to make use of what I had instead.

Pinning the bias tape to the dress at the front opening.

I cut strips of the teal fabric on the bias, and made self-fabric bias tape. I ended up pinning the bias to the gown a LOT more than I normally would because of how slippery and shifty the velvet is.

I handled the inner corner of the back of the V-back gown using the technique from this Pin.

From there I machine sewed the bias tape to the gown on the right side, then folded it over and hand-stitched the bias on the lining side.

(I can machine stitch it, but I always like the final result much better when I hand-sew the bias second side.)

After stitching, the bias trim needed to be pressed again, and I repeated all of that on the armholes.

To close the overdress I originally planned to have the closure be part of an attached belt that was sewn to the garment… but then I considered that because I had the red-gold giornea as well, that perhaps the belts could be interchangeable accessories…

Which means the teal giornea would need to close on it’s own as well.

Since I was feeling much more confident in hand-sewn eyelets, I thought of a short bit of lacing to close the overdress, but then skipped that, and moved to a set of three large hooks and eyes instead which mean the closure is nearly invisible with the two edges just meeting. I can see putting a large broach here or something if I find it in the future as well – have something that could move around a bit.

Below are the finished outfit photos, including the headwear that I’ll blog about soon. 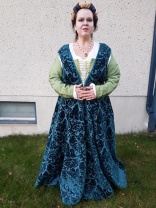 The complete “Celebration” Italian outfit from the front, holding the over-dress open to show the silk skirt under it.

Complete outfit from the back – the Italian “celebration” outfit.